While Galen Hall started the day as chip leader, it was Bertrand “ElkY” Grospellier who finally took down the final table at the High Roller Championship EPT Grand Final in Madrid. 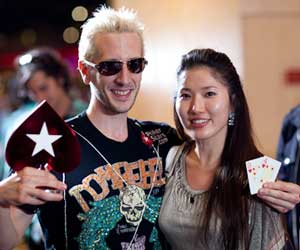 At the beginning of the day Grospellier was not the favorite to win the title. PokerStars Caribbean Adventure (CPA) winner Galen Hall from the USA, the dominant chip leader, lost a huge pot at the start of the final table against the new chip leader, German Benny Spindler. That pot was also his last one, Hall finished seventh and won an amount of €57,500.

Spindler speeded things up and he took out Vanessa Rousso (5th) and David Sands (4th). After ElkY took out Juha Helppi (3rd), the two could start on the Heads-Up. The Frenchman Grospellier started with a more than 2-to-1 behind at the Heads-Up, but he showed his class. Because of his aggressive game play he was able to take over the chip lead.

Benny’s fate was sealed holding K♣ 9♦ when he rivered trips getting a 9♠ with already 2♣ 9♣ 4♦J♣ on the board. He called all-in but was beaten against Grospellier’s full house, holding 9♥ 4♥. High Roller Grospellier wins the second tournament of his career and leaves home with his wife Cathy Hong, winning an amount of €525,000.

The final table payout positions were as follows: