Frenchman Bertrand ‘ElkY Grospellier held on to his top spot in the Global Poker Index (GPI) rankings for another week as the top 10 remained unchanged. 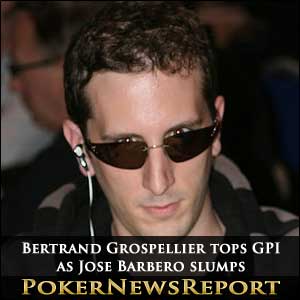 Frenchman Bertrand ‘ElkY’ Grospellier held on to his top spot in the Global Poker Index (GPI) rankings for another week as the top 10 remained unchanged.

However, seven new names appeared in the top 300 as the likes of Ronny Kaiser, Luca Pagano and Sami Kelopuro zoomed into the rankings with big finishes in recent events.

Of course, with players moving up the rankings, others, such as Jose ‘Nacho’ Barbero and Jeff Madsen, have dropped down.

That’s four weeks at the top of the GPI for 30-year-old London-based pro Grospellier now, with players such as eight-time World Series of Poker (WSOP) bracelet winner Erik Seidel, Jason Mercier – both from the USA – and Ukrainian Eugene Katchalov still well in touch with the top spot.

While the top 10 shows no changes from last week, just American Tom Marchese has actually made any headway on points, moving up 62 from the previous week to remain in eighth place.

But we should see some movement next week as the first event of the inaugural Epic Poker League (EPL) comes to a close at the Palms Casino in Las Vegas. Look for Seidel, Mercier and Katchalov to make big gains on their respective Period One results as the GPI weights these scores heavily.

There wasn’t much change between places 11 to 20, with Detroit’s McLean Karr (1920.13 points) moving up two places to 15th after winning a 20-player high-roller event in Macau, resulting in former poker dealer Juha Helppi, of Finland, and the Czech Republic’s Vivek Rajkumar dropping one place each to 16th and 17th respectively.

Kaiser (1,272.846) made the biggest impression on this week’s list as he debuted on the top 300 in 167th place following his European Poker Tour (EPT) Tallinn main event success that saw the Swiss player leave Estonia with the $395,740 top prize.

Meanwhile, Finland’s Kelopuro – who finished seventh at the same event in the beautiful Swissôtel and also recorded a second-place finish in the $10,000 Pot-Limit Omaha Championship for $503,173 in this summer’s WSOP in Vegas – entered at 182nd place on 1,244.287 points, while Italian Poker Tour (IPT) San Remo main event winner Pagano (1,251.102), of Italy, sits at 175th for his first appearance on the rankings.

But the biggest gain from any player already included in the rankings was made by Irishman John O’Shea (1,217.023), who moved up 90 places to 190th after recording a 29th-place finish in Tallinn to add to his two other cashes since March this year.

With so many pros making massive gains, others had to drop down, with Barbero – who has struggled lately – dropping a massive 78 places to 203rd on 1,191.119 points. The Argentinian has just two in-the-money finishes counting towards his Period One stats, resulting in his significant slump.

However, that success – for over $625,000 – has now fallen into Period Four of the GPI and doesn’t count so highly any more.

Some of the big names to drop out of the top 300 include Portugal’s Joao Barbosa, Tyler Smith, of Nevada, New York State’s Micah Raskin and Scott Clements, of Washington State.

As noted above, the EPL main event ends today, so it’s very likely there will be some noteworthy changes in the top 300 come next week, with Team PokerStars Pro Grospellier’s lead possibly coming under attack. Check back here for updates.