Frenchman Bertrand ‘ElkY’ Grospellier has made it three successive weeks at the top of the Global Poker Index (GPI) rankings. 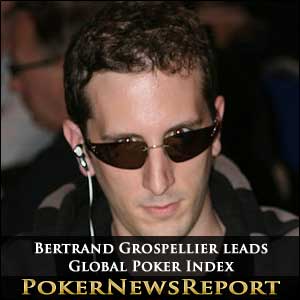 Frenchman Bertrand ‘ElkY’ Grospellier has made it three successive weeks at the top of the Global Poker Index (GPI) rankings.

The Team PokerStars Pro is just the fourth player to have completed the triple crown of poker, with wins in the World Poker Tour (WPT), European Poker Tour (EPT) and WSOP, but is not too far ahead of second-placed American Erik Seidel.

Outside the top 10, yet another American, Vanessa Selbst, continued her slow slide down the rankings – which have been created by Federated Sports & Gaming (FS+G) – to drop another two places to now sit in 13th place on 1985.30 points.

But Canadian superstar Daniel Negreanu (2005.60) and American David Peters (1989.99) moved up one place each to fill the 11th and 12th spots respectively.

Six players made their first appearances on the GPI rankings this week, with the most notable being 2004 WSOP main event champ Greg Raymer (1035.26), of North Dakota, in 293rd place.

As a result, some well-known faces dropped out of the list, including Alan Sternberg, Andrew Pantling, Yuval Bronshtein and James Bord, although Tyler Smith (1025.95) was the biggest loser of the week after falling a staggering 104 places into 300th.

Numerous pros will be aiming to move up the GPI rankings over the next few weeks as the Legends of Poker, the European Poker Tour (EPT) in Tallin – which is taking place right now – Latin American Poker Tour (LAPT) Uruguay, and EPT Barcelona all take place in August.

Not too far off on the horizon are the Epic Poker League (EPL), WSOP Europe, and the Festa al Lago Classic, so it highly likely there will again be some big winners – and losers – to track over the next few months.