Grospellier will add some French flair to the upcoming PartyPoker Premier League V after it was announced he had been added to the already-stellar line-up for the event. 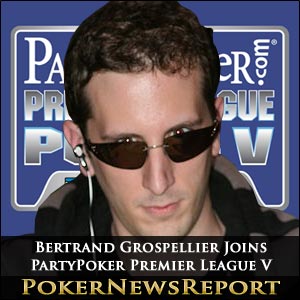 Superstar poker player Bertrand ‘ElkY’ Grospellier will add some French flair to the upcoming PartyPoker Premier League V after it was announced the Triple Crown winner had been added to the already-stellar line-up for the Vienna event.

The 31-year-old Team PokerStars Pro – who is “super excited” to be making his debut in the event – joins an incredible list of pros already signed up to the $125,000 buy-in tournament that will run from April 4 to 10 at the Austrian capital’s Montesino.

Andy Frankenberger Aiming for Another Win

Just one more pro will be added to the 16-player line-up before the start of the event – which is to be presented by lovely Team Party Poker Pro Kara Scott – on April 4, while two players will qualify via the televised play-offs.

The tournament is also scheduled to kick off before the PartyPoker.com-sponsored World Poker Tour (WPT) Vienna €3,500 buy-in main event is staged between April 10 to 15, while the Party Poker Big Game VI begins on April 11 for a 48-hour event.

Grospellier ‘Super Excited’ to be Playing in Austria

One-time World Series of Poker (WSOP) bracelet winner Grospellier is certainly eager to be making his Premier League bow, saying: “This will be the first time I have taken part in the Premier League and I’m super excited to compete with all those great players in such a unique and interesting format.”

He is also thrilled to be a part of such an amazing tournament, saying: “I’m very excited to be a part of the Premier League. I have long been a fan of the format as it brings together some of the world’s best players with the greatest personalities in the game.”

Additionally, the American – who finished fifth for $32,396 in the 2009 WSOP event #53, a $1,500 buy-in Seven-Card Stud Hi-Lo-8 or Better tournament, in Las Vegas – expects to see an increase in numbers for the latest WPT main event from last year’s 555 starters in the Montesino Pokertainment Centre, when Russian Dmitry Gromov pocketed $636,733 for taking down the €3,200 buy-in event.

The Vegas-based Savage added: “WPT Vienna has quickly turned into a must-attend poker festival and its importance on the global poker calendar will only continue to grow.”

Now, if you have the urge to take a shot at the biggest names in poker, this weekend will be your last chance to qualify for the WPT Vienna main event with Party Poker. Each prize package is worth $7,000 and includes the $4,700 main event buy-in, six nights’ hotel accommodation and $900 in spending money.