French superstar Bertrand ‘ElkY’ Grospellier has made the most significant move on the Global Poker Index (GPI) Player of the Year standings by climbing 12 places into 14th. 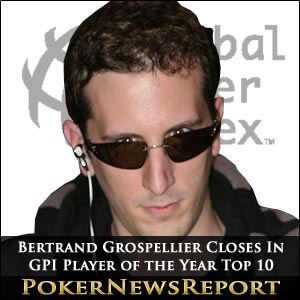 French superstar Bertrand ‘ElkY’ Grospellier has made the most significant move on the Global Poker Index (GPI) Player of the Year standings by climbing 12 places into 14th.

Grospellier zoomed up 49 places last week, before adding another 45.42 points this week to continue his charge towards the top 10.

Duhamel – who has enjoyed a fantastic start to 2012 – took hold of the GPI PoY top spot back in January and has refused to release his grip since, with the number one pro’s huge 252.8-point lead over fellow Quebec native Cajelais actually greater than the latter’s 237.25 advantage over Argentinian Jose Ignacio Barbero in 300th place.

It is also very likely that the 24-year-old Canadian will retain his place atop the leaderboard until at least the 43rd staging of the WSOP is completed in Las Vegas this summer – mainly because the Rio All-Suite Hotel & Casino series contains a high proportion of big buy-ins and huge fields.

However, even if Cajelais were to win a  $10,000 buy-in tournament with 400 entrants, Duhamel would still retain his place at the top of the PoY standings.

PoY Leader Way Ahead of the Pack

As the PoY chase only counts six cashes during the first half of the year and five thereafter, Duhamel is the sole contender to have a result excluded, with his Bay 101 cash knocking out his fourth place in the PCA Super High Roller.

Cajelais, meanwhile, gained the second spot on the PoY rankings early last month after his fourth place for $256,300 at the Bay 101 Bounty tournament was added to his earlier trio of cashes in January.

However, there was very little movement, besides Grospellier’s climb, inside the top 100 placings, although Florida’s Rajesh Vohra – who took fourth place for $40,500 in last month’s $3,300 buy-in No-Limit Hold’em main event of the 2012 Battle of the Beach in Pompano Park – climbed an astonishing 235 places to sit in 110th on 154.16 points.

A landmark was also reached on the GPI PoY this month as Italian Federico Cipollini required 57 points to fill the last place on the 1,000-strong rankings table.

Now, with Arben Zenuni at 1,000th on 57.17 points, any player hoping to gain a place on the list will have to either secure multiple cashes or take down a $1,500 buy-in event with no less than 300 players registered to overtake the Swiss pro on the rankings that honours the player who collects the most impressive set of results during the calendar year.

You can find out more information on the Global Poker Index on our GPI page.