Bertrand Grospellier Back on Top of Global Poker Index 300

Team PokerStars Pro Bertrand ‘ElkY’ Grospellier has returned to the head of the Global Poker Index (GPI) rankings of the top 300 players in the world after a fourth-month gap. 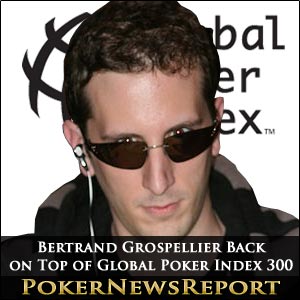 Team PokerStars Pro Bertrand ‘ElkY’ Grospellier has returned to the head of the Global Poker Index (GPI) rankings of the top 300 players in the world after a fourth-month gap.

The 30-year-old from Melun in north-central France was last in the number one spot back in August, but, although his points remain the same as last week, he has overtaken last week’s top man Erik Seidel after the American lost 34.59 points.

The Las Vegas native certainly started this year on fire, with massive wins and pay days in his Period 2 section from the AUD$250,000 Super High Roller No-Limit Hold’em event at the Aussie Millions in January, the following month’s $25,100 High Roller Event from the LA Poker Classic, and the $25,000 No-Limit Hold’em tournament at the NBC National Heads-Up Championship in Las Vegas in March.

However, Triple Crown winner Bertrand Grospellier nabbed the top spot from Seidel as the American’s Period 3 results – that is, the second half of last year – were nothing to write home about.

London-based Grospellier is undoubtedly a worthy GPI leader, though, as his collection of a World Poker Tour (WPT) crown, a WSOP bracelet and a European Poker Tour (EPT) triumph proves.

After a few weeks with little movement in the top 10, we have a new name in at number eight in Englishman Chris Moorman.

The Brighton native certainly had cause to extend his 26th birthday celebrations beyond Wednesday night – and possibly into Thursday morning anyway – after he leapt 192.65 points and 10 places for a 2,051.57 mark to replace Sorel Mizzi in the top 10.

Moorman, who saw ageing results from the last two stagings of the WSOP drop into Period 2 and Period 4 respectively, added enough points to oust Mizzi as the Canadian pro fell down six spots to 14th in the rankings

Mizzi dropped a massive 217.16 points to 1889.56 when his ninth from last year’s WPT Five Diamond World Poker Classic was moved into Period 3.

However, there could be even more movement in the leading positions come next week as, along with older WSOP scores dropping down into lower periods, quite a few new event results will be featured.

These include some big tournaments, including Russian Andrey Pateychuk’s success from the WPT Prague on Monday this week.

Then there are other big tournament stats to come in this week from the EPT Prague and the WPT Five Diamond World Poker Classic in Las Vegas. Both will be completed this weekend, so there should be some big moves and possibly huge drops come next week’s rankings release.

Back to this week’s listing, though, and there were 13 new players making it into the GPI’s top 300.

On a more positive side, the biggest climber of the week was Jean-Philippe Rohr – who shot up 87 places to 173rd on 1,237.31 points – after the Frenchman finished in 20th at November’s WPT Marrakech.

However, what is good news for one player always means bad tidings for another – and so we saw some big drops down the GPI 300, most commonly as a result of the final placings from last year’s WPT Five Diamond World Poker Classic moving into Period 3 from Period 2.

Check back here every week for the latest developments on the GPI. You can find the whole top 300 at globalpokerindex.com.