Bertrand Grospellier and Lex Veldhuis Geared up for Big Fight

there could be some really bloody noses and bruises to bodies when the much-anticipated mixed martial arts (MMA) bout between poker pros and good friends Bertrand ‘ElkY’ Grospellier and Lex Veldhuis finally gets underway next week. 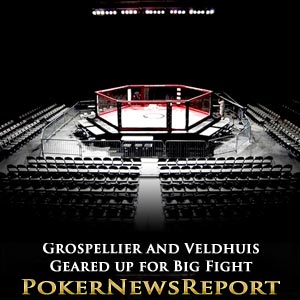 Poker can be a tough game, with proverbial body blows and head knocks a regular occurrence. However, there could be some really bloody noses and bruises to bodies when the much-anticipated mixed martial arts (MMA) bout between poker pros and good friends Bertrand ‘ElkY’ Grospellier and Lex Veldhuis finally gets underway next week.

Veldhuis is confident of victory, stating that his fight experience, as well as his “more athletic” build and “better coordination”, should ensure his success.

The fight was first talked about two years ago at the European Poker Tour (EPT) Barcelona event, but, following a few near things and postponements, Grospellier and Veldhuis will at long last meet up in the ring on Tuesday.

Dutchman Veldhuis – who now lives in Las Vegas – took to his blog to set out the rules of engagement for the fight in Marbella, Spain.

He and Frenchman Grospellier will take part in a bout consisting of five three-minute rounds, with the winner being announced when there is a retirement or knockout. No judges’ points decision will come into effect, however, although a referee will be in the ring to ensure compliance with the rules.

The duo will wear gloves, but that will be the only protection allowed as padding cannot be worn on the legs or head.

Spectators should be in for some tasty action, though, with spinning kicks and punches being allowed to all of the body, except the groin, while knees can be employed to damage anywhere on the body – with the exception of the groin again – and face.

However, no punches will be allowed to the back of an opponent’s head and head-butting is banned.

Veldhuis, who is three inches taller than fellow Team PokerStars Pro Grospellier, was certainly displaying a lot of confidence ahead of next week’s match-up, listing his one-and-a-half years of boxing training when a teenager and his involvement in “a couple of street fights” as evidence of his superiority.

The 27-year-old added that he is “more athletic and I have better coordination, plus some experience in fights”, while suggesting that “Elky is in better shape and has been working out more consistently, going on special training camps and putting in a lot of hours”.

However, Veldhuis also stated that the 30-year-old Frenchman’s “coordination seems a bit bad” and that he is far from being “a natural athlete”.

Of course, this is all just talk before the real action begins, but the legendary Doyle Brunson is more than a little concerned by the decision of Veldhuis and Grospellier to enter the ring for their MMA battle.

The 10-time World Series of Poker (WSOP) bracelet winner, who is friends with both pros, took to microblogging website Twitter to air his concerns, and write that the bout “sounds like an ego fight”, while adding that “U guys are nuts, someone is going to get badly hurt”.

While the fight won’t be streamed live, it will be recorded, so you’ll be able to catch up on this monumental battle soon enough. Who will you be favouring? It does appear that Veldhuis has the advantage, but will Elky beat him down?

All will be revealed next week… Follow Poker News Report on Twitter to stay informed on the latest poker news.