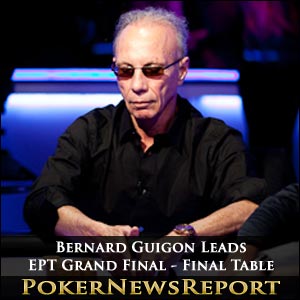 Guigon – who will be in seat two of the eight-handed final table – holds 4.9 million chips to be almost two million ahead of second placed Brazilian Rodrigo Caprioli (2,945,000) at the Monte Carlo Bay Hotel & Resort.

Day 4 of the event lasted five hours, taking the 26 survivors down to the final eight as they all chase the €1.5 million top prize from the €6,650,000 prize pool created by the tournament’s initial 665 starters.

Frenchwoman Lucille Cailly also survived a thrilling fourth day to bag up in third place on 2,865,000 chips, securing the first elimination yesterday when sending Andrew Pantling to the rail in 26th for €35,000 with her pocket aces – and will be aiming to become the first female Grand Final winner after already securing her place as the first woman to make the final table.

Cailly – who is also at her first EPT final table – produced a brilliant display to knock out Pantling on the first had of the day before then out-flushing Canadian Michael Dietrich to move even further up the rankings.

She did, however, suffer a severe setback when, after seeing that an opponent was on tilt, ran her pocket threes into aces that resulted in her stack being halved. But Cailly remained calm to battle back and end the day third in chips.

There still won’t be a double EPT champion, at least until Season Nine begins, after Belarussian Vadzim Kursevich – the last surviving previous champion – saw his ace-eight hole cards beaten by Ben Vinson’s 7h-3h when the Englishman made a flush to send this season’s Deauville champion eliminated in 25th for €35,000.

However, London’s Vinson – who had started Day 4 in fifth place – could not continue his charge, even though he doubled his stack during the first two levels, as he was then eliminated in 13th place for €60,000 when his nine-ten ran into the pocket aces of Spaniard Andoni Larrabe.

Earlier, American Amit Makhija hit the rail in 23rd for €40,000 when his queens ran into kings, while Californian nearly man Jason Wheeler was knocked out in 18th – also for €40,000 – after his top two pair lost out to an opponent’s set.

Colorado’s Pratyush Buddiga – who only a few weeks back earned $94,127 for taking eighth place in the EPT Berlin main event – must have been full of confidence, but ultimately crashed out in 16th for €50,000 when his ace-eight lost out to Guigon’s pocket kings.

Dutchman Geert-Jan Potijk went from overnight chip leader to being eliminated in 14th place for €60,000 when, from the small blind, his king-nine encountered the queens of an opponent.

The final two eliminations of the day arrived within moments of each other when Alex Mostafavi, of St Kitts, followed Belarussian Vadzim Markushevski to the rail in ninth and 10th places respectively.

Markushevski’s dominating ace couldn’t stay ahead for his disappointing exit, although he did pocket an additional €25,000 as he left with €95,000 after just managing to survive longer than 11th placed Larrabe, who took home €70,000 for his troubles.

Mostafavi, meanwhile, busted out in ninth – also for €95,000 – when his ace-seven failed to overcome the jacks of Guigon. With just nine big blinds, Mostafavi – in middle position – raised to 250,000, only for big blind Guigon to make the call.

The flop came down 10h-10d-5d and Guigon checked, before Mostafavi swiftly shoved all-in. Guigon took his time before eventually calling. The 7s came on the turn to hand Mostafavi a few more outs, but the 6c on the river ended his tournament and the fourth day’s play as the eight-handed final table was set.

Las Vegas pro Justin Bonomo – who pocketed $2,167,588 for winning the €100,000 buy-in Super High Roller in Monaco just a few days ago – enjoyed another deep run, but this time fell in 28th place for €35,000 when the American’s ace-queen could not overcome Potijk’s queens.

Today’s one-day €100,000 EPT Season 8 Tournament of Champions invitational freeroll, with numerous former winners lined up to take part, will be broadcasted at 13:00 CET at PokerStars.tv – with cards-up and on a one-hour delayed stream. All the streams will feature commentaries in English, Spanish, German, Russian and Italian.