Vladimir Bozinovic won the WPT Main Event in Baden at the weekend, but the tournament will be remembered for the ill fortune suffered by Paul Berende. 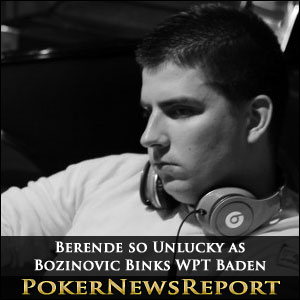 Vladimir Bozinovic won the WPT Main Event in Baden at the weekend, but the tournament will be remembered for the ill fortune suffered by Paul Berende.

As the six players took their seats at the final table in the Casino Baden, there was a very international flavour to the proceedings. Serbian poker player Vladimir Bozinovic had bossed the proceedings throughout Day 4 and entered the climax to the Main Event with a chip lead of 10 big blinds over London-based German Marvin Rettenmaier – who was aiming to be the first player to capture three WPT Main Events within twelve months.

Seated with them were Dutch player Paul Berende, local hope Oswin Zieglebecker, Finnish pro Kimmo Kurko and Party Poker qualifier Gzegorz Wyraz – who was aiming to maintain Polish victories in WPT Main Events after the success of Marcin Wydrowski at the WPT Prague in December.

Wyraz and Rettenmaier First to Fall

Gzegorz Wyraz´s stay at the final table lasted no longer than 15 minutes. With blinds of 20,000/40,000 (ante 5,000), the Pole was forced into an early manoeuvre and shoved from the hijack seat with 5♥ 5♠ straight into Oswin Zieglebecker in the Big Blind who was holding 6♥ 6♣. The 6♠ on the turn made the remainder of the cards irrelevant and Poland´s hopes of a second successive WPT victory were sent to the rail.

Paul Berende then took a big slice of Marvin Rettenmaier´s chips in K♠ 7♦ > Q♣ J♣ confrontation, before Rettenmaier (K♥ Q♠) got the rest of his chips in against the active Kimmo Kurko (A♣ Q♣). The board ran J♦ high, and Rettenmaier was eliminated in fifth place.

Kurko’s elimination of Rettenmaier was only a temporary reprieve for the Finn. In the next level of play (blinds 25,000/50,000 / ante 5,000) all-in bets from any position were becoming the norm, and Kurko (A♥ J♠) chose the wrong moment to call the shove from Vladimir Bozinovic (K♠ 9♣) when the flop of K♥ 10♣ 3♥ was dealt – Kurko missing his Ace busting out in fourth.

Soon after, Paul Berende would have taken a massive chip lead into the heads-up had his A♥ K♠ held against Oswin Zieglebecker’s A♣ Q♠. Instead the board ran 10♠ 9♦ {8♠ç / 9♠ / J♥ to give Zieglebecker a gutshot straight and a valuable double up. However, a shove with A♠ K♥ also led to Zieglebecker’s downfall, as Vladimir Bozinovic (A♣ 10♣) hit the 10♠ on the Turn to eliminate the Austrian in third and take a 4.8 million -v- 2.6 million chip advantage into the heads-up.

The chip advantage was quickly turned around in the first hand of the heads-up when Paul Berende flopped a pair of Jacks to edge into a narrow lead, and the Dutchman must have thought he had won the tournament when calling Bozinovic’s Q♠ J♠ with his own A♣ Q♥. The flop and turn of 10♠ 9♦ 2♥ / 5♣ kept Berende well ahead, but the 8♥ on the river gave Bozinovic a straight and a 6.2 million -v- 1.3 million chip advantage.

Berende won a few chips back in a small pot, but the tournament was soon put to bed when Bozinovic (A♠ 9♠) called Berende’s A♣ 8♣ shove and only one solitary club was dealt among the community cards. Bozinovic became the latest player to become a WPT Champion in his first ever cash outside of his native Serbia.