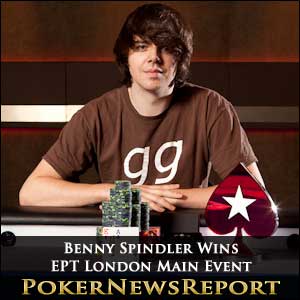 Benny Spindler, who took a massive chip advantage on the final table when busting out UK poker player Martins Adeniya, met limited opposition from the remaining players to wrap up a tournament which he had lead on Days 1 and 2 and lurked menacingly behind the leaders throughout days 3, 4 and 5.

Spindler´s natural aggressive style of play has often let him down in the past – establishing good positions in the early stages of tournaments, only to get caught out when it mattered – but at the Hilton Metropole yesterday it paid handsome dividends.

Having captured the chip lead from Martins Adeniya when eliminating qualifier Miroslav Benes and then claiming a massive pot against Mattias Bergstrom, Spindler won a coin flip hand against Adeniya – also a very aggressive player – to claim a pot of 7.3 million chips and send one of his most dangerous opponents to the rail.

With almost half the chips in play in front of him, Spindler was able to cover any move among the remaining players, and took his knockout tally to three with the elimination of Kevin Iacofano, and then four when knocking out Juan Manuel Pastor – who had the misfortune to be seated to the right of Spindler throughout the day.

Token resistance came in the form of American Steve O´Dwyer – the winner of the first ever Epic Poker League Pro/Am – who took out Mattias Bergstrom in fifth and Andre Klebanov in third to set up a short heads-up finale against the German. However, Spindler´s far superior chip stack enabled him to handle anything O´Dwyer threw at him, and when the American shoved with K♠ J♣, Spindler was right there with his A♣ K♦.

The A♦ on the flop effectively settled matters, and although Dwyer had the chance for a gutshot draw on the river, the 6♠ was of no help to him. Having been placed third in the PCA Main Event in 2009 and second in the EPT Madrid Hi-Rollers, Spindler won his well-deserved first major title, the winner´s bracelet and a cheque for £750,000 to take his career live poker winnings to over $3 million.

A total of 691 players bought in or qualified for the £5,250 EPT London Main Event, creating a total prize pool of £3,351,350. A total of 104 players cashed in the event, including 23 [geolink href=”https://www.pokernewsreport.com/pokerstars”]PokerStars online qualifiers[/geolink]. The top 12 players each picked up substantial cheques, the details of which are below:-