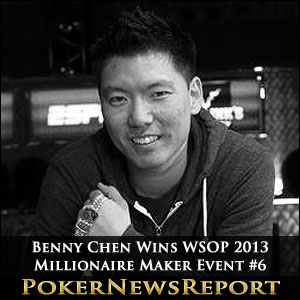 Jon Keuther was the first player to be eliminated on the final day after his A♠ K♣ was beaten by Dan Kelly’s A♥ A♣. Although Kuether has an inside straight draw after the flop, a straight did not come and an official final table was set.

Kelly went on to claim his second successive scalp after he eliminated Theron Eichenberger in ninth spot. Eichenberger was the first player gone from the final table after his A♣ 8♦ was beaten by Kelly’s 5♦ 4♦ after the Q♦ on the river gave him a flush.

The elimination put Kelly in the chip lead, though it did not last long after a series of chip ups by both Michael Bennington and Jonathan Gray. Robert McVeigh was eliminated in eighth place after his A♣ J♣ was dominated by Upeshka Desilva’s A♠ K♠, boosting the Sri Lankan-American’s stack to a little less than four million.

Desilva’s chip up did not take him far into the final table, however, as he was the next player to be knocked out at the hands of Justin Liberto. Although Desilva’s J♥ J♦ was the superior hand to Liberto’s 8♥ 7♣, Liberto was able to hit a straight on the river after the 5♦ was the last card shown on the board.

Online poker sensation Chris Hunichen was eliminated in sixth spot, a move that also came at the hands of the now-chip leader Liberto. Liberto’s A♥ 3♥ were behind against Hunichens’s 6♦ 6♣ before the flop, but things changed after the turn when the A♦ came, which gave Liberto the higher pair and the hand.

Liberto would make it three in a row a short time later after he eliminated former chip leader and one-time WSOP Gold Bracelet winner Dan Kelly in fifth place. Liberto, who had K♠ Q♦, called Kelly’s pre flop all in. Kelly showed 8♣ 8♠ and was ahead after the flop and turn, but was beaten on the river after the K♥ was shown, which gave Liberto a higher pair.

Four-handed action went on for a number of hours as the chip lead constantly changed hands. Liberto would be the one eliminated in fourth place after his A♣ 9♥ was beaten by Benny Chen’s A♦ 10♥. Both players hit their bottom kicker on the flop, which kept Chen ahead and won him the hand after the 4♥ on the turn and the 2♥ on the river was of no help to Liberto.

Jonathan Gray was the next to go after being the second in a row to be eliminated by Chen. Chen’s K♦ Q♥ was dominated by Gray’s A♠ Q♣, but the flop of K♣ Q♠ 8♣ was kind to the Canadian. The 5♣ on the turn gave Gray a flush draw, but he received neither that nor an Ace as the 2♠ on the river put him out of the event in third place.

This left Chen and Michael Bennington in the tournament, with Chen holding a major chip lead when heads-up play began. After seven hands of heads-up play, Chen would eliminate Bennington in second place en route to winning the event.

Chen raised to 1,000,000 before the flop, which was three-bet to 1.6 million by Bennington. Chen responded by moving all in and Bennington called with 3♠ 3♣. He was behind after Chen showed 9♥ 9♠, which remained dominant after the flop came K♣ 8♦ 2♥. The J♣ on the turn and the A♣ on the river was of no help to Bennington and the event came to a close.

Bennington still won $741,902 for his solid efforts in the tournament, while Chen became the tournament’s millionaire by taking out the top $1,199,104 cash prize along with his first ever WSOP Gold Bracelet.