Benjamin Scholl took down event #20 at the World Series of Poker for $206,760 and a first gold bracelet at the Rio All-Suite Hotel & Casino in Las Vegas. 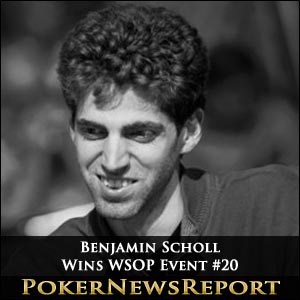 Benjamin Scholl took down event #20 at the World Series of Poker (WSOP) for $206,760 and a first gold bracelet at the Rio All-Suite Hotel & Casino in Las Vegas.

Pennsylvania’s Ben Scholl – after nearly 27 hours of play over three days – emerged victorious in the $5,000 buy-in Limit Hold’em tournament from a 166-player field by ultimately defeating California’s Andrew Prock in a heads-up clash that left the runner-up with a $127,773 pay day.

The final hand saw 26-year-old Scholl, on the button, raise and Prock re-raise. Scholl made the call to see a A♠ 6♥ 7♦ flop. Prock led out and Scholl ahead of the 7♥ turn. Prock then shoved in his final 15,000 chips and Scholl called for a showdown.

Aces Do the Trick

Prock revealed 3♥ 3♠ while Scholl showed A♥ 10♣ to have top pair and the lead. Prock required a three on the river to stay alive, but the 7♣ completed the board to hand Scholl the victory.

Ayman Qutami Out in Ninth

California’s Ayman Qutami was the first final table player to hit the rail in ninth place for $19,395 when his Q♣ J♦ lost out to the Q♦ 6♦ of Prock when the 6♥ arrived on the river.

Vegas-based Nicholas Derke also lost out to new chip leader Prock when exiting in eighth place for $24,139, while Jeff Shulman regained the lead soon after when knocking out Maine’s Matthew Woodward in seventh place for $30,529. He was soon joined at the rail by Pennsylvania’s Matt Glantz in sixth for $39,259 and Raymond Dehkharghani, of Kansas, in fifth for $51,344.

But Vegas-based Shulman’s four-handed chip lead didn’t last long as Massachusetts’ Jesse Martin was eliminated in fourth for $68,322. Shulman came close to hitting the rail several times during the marathon battle that ensued when three-handed.

However, he eventually lost out to Scholl to exit in third place for $92,562. Shulman’s last hand saw him raise on the button with big blind Scholl calling to see a Q♠ 8♠ 2♦ flop. Financial analyst Scholl decided to check-raise and Shulman called. The K♦ turn saw several bets before Shulman placed the last of his chips into the pot.

Shulman showed A♥ K♠ to look poised for a double-up and against Scholl’s 9♠ 8♥. But the 9♣ river gave Scholl the elimination to set up his head-to-head with software designer Prock.