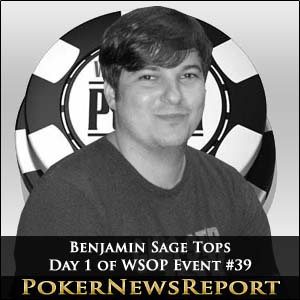 Kushner certainly benefited from an incredible five-player all-in hand at one point that involved John Juanda, Brian Hastings and two other opponents. Kushner’s aces hole cards looked good on a 4♣ 3♣ 3♥ board, while the 3♦ turn handed him a full house that no other player could match for a gigantic pot.

However, that hand was nothing compared to the two Mike Cameron lost. The unfortunate Cameron was left baffled – and more than a little annoyed – after twice losing out to quads!

The first saw Cameron turn quad fours, but Mohsin Charania incredibly rivered quad eights, while the second saw Cameron make tens full of fives from a 6♦ 5♥ 5♣ 10♥ K♣ board, only for Will ‘The Thrill’ Failla to flop quad fives. Poor old Cameron never quite recovered from those two tough-to-take losses and was later eliminated.

The leading 36 players will be assured of making at least $16,801, but they will all be chasing the top prize, of course, as well as the gold bracelet that comes with a WSOP victory.

Phil Ivey is an Early Casualty

Today will involve 10 more levels of play, unless the final table is reached – which will see the action ended earlier.