Ben Windsor admitted to being “speechless” after coming from behind to defeat Simon Deadman heads-up and win Leg 5 of the Grosvenor UK Poker Tour in Walsall. 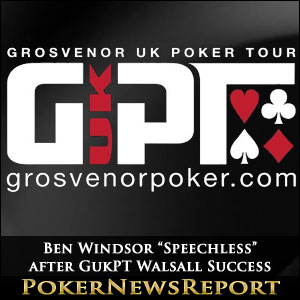 Ben Windsor admitted to being “speechless” after coming from behind to defeat Simon Deadman heads-up and win Leg 5 of the Grosvenor UK Poker Tour in Walsall.

Despite the attractions of the sun and big money poker over in Las Vegas, 196 players entered the £500 buy-in GukPT Walsall Main Event – not quite reaching the £100,000 guarantee, but enabling the top twenty players to cash in the tournament.

The money bubble burst late on Saturday evening when Ben Windsor rivered his open-ended straight to best Phil Walker´s flopped set of Nines, and twelve players returned to the G Casino in Walsall to compete in Sunday´s climax for the £29,000 first prize.

Mo Qureshi had gone into Day 3 of the GukPT Main Event with a substantial chip lead, but he was reduced to one of the shorter stacks when Ben Windsor doubled up against him A♥ A♦ > J♣ J♠, and Windsor extended his chip lead when eliminating Ian Bradley in tenth place with a flopped set of Deuces > Bradley´s pocket pair of Kings.

When the GukPT Walsall final table got underway, blinds were 5,000/10,000 (ante 1,000), and due to the top heavy nature of the leaderboard, there was no hanging around waiting for the action to start.

Tony Harman doubled-up almost immediately against Simon Deadman A♦ J♠ > 10♥ 10♣, but Deadman recovered within the first orbit of the button to bust Mo Qureshi in ninth place A♣ Q♥ > K♦ J♥. John Eames was also an early casualty – moving all-in with Q♣ J♣ on a board of K♠ 10♣ 5♠ / 6♣, but failing to hit his open-ended straight flush draw against Ben Windsor´s top pair.

Windsor Takes Half the Chips in Play

Ben Windsor´s domination of the GukPT Walsall continued when he took five pots in a row – including the scalp of Andrew Garland in seventh place K♦ K♣ > J♣ J♠ – and he had over half of the 3.84 million chips in play when winning a 442,000 chip pot against Maz Bako with A♦ K♦ on a King-high board.

Bako chipped up again with the elimination of Don Jones in sixth place, and then sent Michael Hart to the rail in fifth place A♣ A♥ > K♣ K♠. He moved up to be the closest challenger to Ben Windsor when busting Michael Hart in fourth place with a rivered straight A♦ J♠ > 5♣ 5♠}, but still had plenty of work to do to catch the chip leader as the tournament went three-handed.

Deadman Recovers to Lead into Heads-Up

Simon Deadman´s recovery from having thirteen big blinds to being chip leader was quite amazing. Several small pots and some uncontested shoves enabled him to chip up as the blinds rose to 12,000/24,000 (ante 3,000), and then his rivered top pair with K♦ 2♠ enabled him to overtake Maz Bako in second place.

The conclusion to the GukPT Walsall was described as a chess match by those commentating on the live feed, and – after Ben Windsor had closed the deficit to just eight big blinds with A♦ 8♣ > A♠ 6♦ (both players connecting for two pairs) – a deal was agreed which would see the players spilt the prize money, with £1,000, a seat in the GukPT Grand Final and the GukPT trophy to play for.

Ben Windsor then moved back into the chip lead when forcing a fold from Deadman on a board showing a Full House of Threes over Tens, and although Deadman doubled back K♠ 10♠ > Q♣ 3♥, a massive hand decided the outcome of the GukPT Walsall Main Event.

The final all-in of the tournament came when Ben Windsor shoved from the button with A♦ J♦. Simon Deadman made the call with A♣ 10♦ and the cards were on their backs. The flop of 8♥ 8♦ 7♠ kept Windsor ahead, although Deadman´s chance of a chopped pot improved when the A♥ was dealt on the Turn. The final card was the 6♣, and Ben Windsor´s Jack kicker gave him the GukPT title by the narrowest of margins.