Ben Wilinofsky has won EPT Berlin for an impressive €825,000 score. Although Wilinofsky is a very accomplished online player… 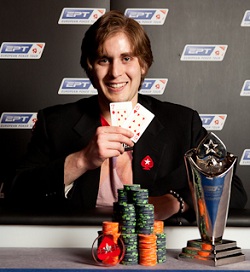 Ben Wilinofsky has won EPT Berlin for an impressive €825,000 score. Although Wilinofsky is a very accomplished online player, having amassed over $1 million dollars in online tournament earnings, up until this tournament, he had struggled with making an impact on the live tournament circuit.

It wasn’t long before Wilinofsky asserted his dominance at EPT Berlin. Starting the final day’s play as the overall chip leader, by the time the action got to the final table he was busy taking advantage of his big stack and accumulating even more chips.

However, it took more then an hour for the final table to lose its first player, after Jonas Gutteck who was short-stacked was forced to move all in with Js-9s. Unfortunately for him, Heinzelmann woke up with pocket kings at the same time in the big blind. A king in the door made the situation worse for Gutteck and he was busted out of the tournament in eighth place.

When the blinds were at 60,000/120,000 with a 15,000 ante. Martin Jacobson opened to 240,000 which resulted in Armin Mette moving all-in for 2,175,000. Wilinofsky then moved all-in himself from the big blind and Jacobson folded. When the two players revealed their hands, Mette showed pocket twos which were up against Wilinofsky’s big slick. The board ran out 5d-4s-Ah-Ac-Ad giving Wilinofsky runner runner quad aces and sending Mette to the rail.

Over the next hour of play at the final table, both Jacobson and Vadzim Kursevich busted out, leaving Heinzelmann and Wilinofsky to battle it out heads up to determine the EPT Berlin champion.

Despite starting the heads up match with more then double the chip advantage it still took Wilinofsky more than an hour to claim the victory. In the last hand, Wilinofsky limped in on the button and Heinzelmann checked behind. The flop came down 8s-5c-3d, Heinzelmann bet 225,000 and Wilinofsky raised it to 500,000 to see his opponent move all in for 4,025,000. After some deliberation he ended up making the call before turning over 7h-6d for an open-ended straight draw, which needed improving against Heinzelmann’s 9h-8h for top pair. And he did manage to improve as the turn was the 9s to complete the nut straight, giving Wilinofsky his first major live tournament victory, allowing him to take the monkey off his back!

The 2011 European Poker Tour Berlin stop took place at the Spielbank Casino. If you would like to have some fun online then check out my friends list of the best online casinos for real money and win cash from the comfort of your own home!