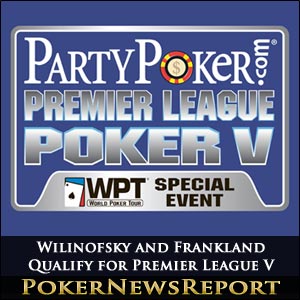 PartyPoker online qualifier Frankland secured his place in what should be a thrilling event – which will be broadcast at a later date on Sky Sports in the UK and Ireland with Team Party Poker Pro Kara Scott presenting – by ultimately defeating Italian Giovanni Rizzo in their heads-up clash.

Frankland was obviously thrilled to make the glamorous event, telling the PartyPoker Blog: “I feel ecstatic. It’s such a nerve-racking moment playing for a $125,000 bubble. I’m just glad I came out on the right side of it.

“It’s a brilliant opportunity, not only for the money, but it’s where I want to end up in my career eventually. I don’t want to be the guy qualifying in this, I want to be one of these big guns. So this is a step in the right direction for me.”

On the final hand of qualifier one, Rizzo raised it to 160,000 while holding As-4c, only for Frankland to move all-in for 2,115,000 with his Ah-6s. Rizzo let out an audible sigh, leant back in his chair, scratched his head and counted his stack, but finally made the call.

The first card revealed by the dealer was the 4h to give Rizzo a pair, but the Italian was left disappointed as the 6h then arrived to hand Frankland a better pair, to be followed the 10s for a completed flop.

Rizzo appeared pained by that flop, while the Englishman had the look of a man in shock. The 8d turn changed nothing to leave Rizzo with just a few outs, before the 3s on the river confirmed Frankland’s place in the World Poker Tour (WPT) Special Event.

The last hand of their heads-up encounter saw New Yorker Weisner moved all-in for 930,000 with A♥ 5♣ and Wilinofsky call to show 9♥ 9♠. It was almost over on the flop of Q♥ 9♦ 4♠ after the Canadian collected trip nines – and, with the J♥ on the turn and Q♦ on the river changing nothing, it was Wilinofsky heading into the Premier League V proper.

Wilinofsky certainly shouldn’t be overawed by his upcoming challenge against the likes of Selbst, Antonius and Grospellier, having outlasted big-name players such as Vadim Kursevich, Martin Jacobson, Fabrice Soulier and Mikhail Lakhitov to take down the €5,000 buy-in No-Limit Hold’em main event at last April’s EPT Berlin for $1,174,14 at the Grand Hyatt.

With results like these, it is certain his seven opponents in Group B will be very wary of the Canuck’s obvious talent – and aggression following his dominant display in the qualifier.

Frankland In The Money Recently

Frankland, meanwhile, has amassed a total live tournament earnings of $297,152 following his first cash back on August 1, 2009, when he pocketed just $746 for finishing 28th in a £300 buy-in No-Limit Hold’em event at the DTD Deepstack series at Nottingham’s Dusk Till Dawn.

His latest cash came almost three weeks ago, when the English player earned $3,555 for taking seventh place in the €2,000 buy-in No-Limit Hold’em Eight-Max Bounty event of the EPT Madrid stop at the Casino Gran, while his biggest cash came back in mid-September of 2010 with his third-place finish for $119,409 at the £3,500 buy-in No-Limit Hold’em main event of the English Poker Open at London’s Palm Beach Casino.

The stellar 16-player field will compete for a share of the huge prize pool over seven days until April 10, when the eventual winner will also collect a $25,000 seat at the WPT World Championship at The Bellagio in Las Vegas come May 19 to 26.

As is always the case, the Premier League will see the leading three points-earners from the groups advance to the eight-player final table, to be joined by two others after a series of heads-up clashes between the fourth and fifth placed players.

Even without the PartyPoker Premier League V taking place, Vienna is the centre of attention for poker fans and players alike over the next few weeks, with the Austrian capital city also playing host to the PartyPoker.com-sponsored WPT festivities – including a €3,500 buy-in main event from April 10 to 15 – and the PartyPoker Big Game VI on April 11.