Ben “Ben86” Tollerene took down the PokerStars WCOOP Super Hi-Roller for $616,518 after a three-way deal brought the event to a quick conclusion. 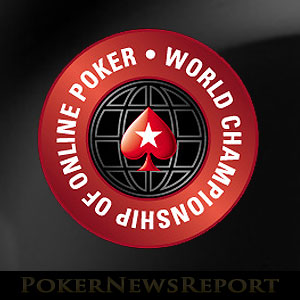 Ben “Ben86” Tollerene took down the PokerStars WCOOP Super Hi-Roller for $616,518 after a three-way deal brought the event to a quick conclusion.

There were some massive swings of fortune at the final table of the WCOOP Super Hi-Roller yesterday, and some incredible stories to come out of the event. The winner, Ben “Ben86” Tollerene is an accomplished high stakes HUSNG player who is rarely seen away from the virtual felt after moving to Toronto in 2011 following the events of Black Friday.

Tollerene went into the final table fourth in chips after eliminating another poker refugee – Andres “Educa-p0ker” Artiñano – 9♣ 9♦ > 10♣ 10♥ (flop was 9♠ 6♦ 6♣!), but whereas some players used up all their luck to reach the final table, Tollerene´s good fortune continued right up until the very last hand of the tournament.

How the Super Hi-Roller Final Table Played Out

Mike “Timex” McDonald started with a healthy chip advantage over Jose Angel “Cejakas14” Latorre, but having leaked a lot of chips during the early exchanges, Tollerene took the early chip lead when eliminating the short-stacked Andrew Moseley in eighth place J♥ J♣ > 9♠ 9♣.

Tollerene extended his lead when rivering an Ace high Flush against Fedor Holz´s missed open-ended straight, and the FFP qualifier “Nopaleva” did his prospects of cashing in the event no harm when doubling up against David Peters K♥ K♦ > A♦ Q♥.

Peters´ loss was critical to his tournament life, and he was the Super Hi-Roller bubble boy just a few hands later when getting all-in with A♠ K♠ against Mikita Badziakouski´s A♣ Q♦, and although hitting a King on the flop and another on the River, Peters was bust in seventh place to Badziakouski´s rivered Ace-high flush.

Peters´ elimination was a cruel blow for the American – who also bubbled the $10,000 buy-in Hi-Rollers event the weekend before last – but it was a springboard for the Belarusian, who went on to river a pair of Sevens to eliminate Fedor Holz in sixth place A♦ 7♣ > 5♣ 5♠.

A fantastic call by Jose Angel Latorre following Mike McDonald´s shove on the board of 7♠ 4♣ J♦ / 2♠ / K♣ saw McDonald bust in fifth place A♦ J♥ > Q♦ J♠, and the fairy tale ride of the FPP qualifier “Nopaleva” came to end soon after – when he shoved his last ten big blinds with 10♠ 6♠ and Ben Tollerene paired an Ace on the Flop and then avoided a fifth Spade on the River.

The remaining three players agreed an ICM deal with $20,000 left for the winner, after which the action concluded pretty quickly. Ben Tollerene´s good fortune continued when rivering a nine-hi flush to best Latorre´s top pair, top kicker; and he then crippled Badziakouski (8♣ 7♣ > K♣ Q♣) when hitting two pairs of the flop against Badziakouski´s flopped pair of Queens.

The battle of the short-stacks was won by Latorre (A♥ J♥ > 6♦ 6♣) when he flopped trip Aces to send Badziakouski to the rail in third, and the final hand typified the way in which the cards were falling for Ben Tollerene last night: