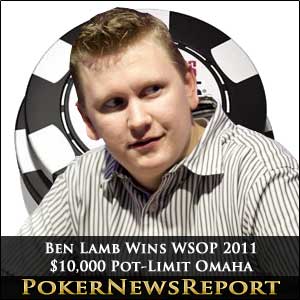 American Ben Lamb overcame 360 other players to finally lift a World Series of Poker (WSOP) gold bracelet that “stays with me forever” after winning the $10,000 Pot-Limit Omaha Championship event #46 in Las Vegas.

The Tulsa native beat Finland’s Sami Kelopuro in their heads-up encounter to pocket $814,436, but, although “the money is good”, the bracelet was undoubtedly more important to the 26-year-old poker pro – after having had to listen to the good-natured ribbing of many friends who already wore that prestigious piece of jewellery.

Lamb must have wondered if he was ever going to collect a bracelet after finishing second in this year’s $3,000 Pot-Limit Omaha event, but that all changed last night in the Amazon Room.

Many of his WSOP-winning mates gathered at the rail to cheer him to victory in event #42 yesterday, with Lamb pointing out that “some of my friends would tell me that I’m a great player…but then they would point to their own wrist and say, ‘Oh wait – I’ve won my gold bracelet. Where’s yours?’”

Now, though, following his fabulous success, Lamb reckons he “can say back to them, ‘I’ve got a $10,000 buy-in World Championship gold bracelet. Where’s yours?’”

Lamb, who dropped out of college after just one year to become a poker pro in 2006, has been coming to the WSOP for five years now and believes that – unlike some of the low buy-in events at the Rio All-Suite Hotel & Casino – this $10,000 buy-in event attracted much “tougher” poker players to make his victory all the sweeter.

There is no doubt that Lamb’s slaughtering of such a field – including three bracelet holders in John Kabbaj, Dario Alioto and Josh Tieman at the final table – will go down as a major highlight of this summer’s WSOP, as much for his delight as the quality of opponent he defeated.

Lamb – who now tops the WSOP Player of the Year leaderboard – was the chip leader going into day three against 37 other competitors and remained there when Sunday’s 10 levels of play were completed and just four survived to return for the final session yesterday evening.

The Vegas-based pro eliminated fellow American Christopher King ($273,575) in fourth place when flopping a flush against King’s aces when all the chip went in pre-flop.

But the aggressive Kelopuro was still a danger as he doubled-up against Britain’s John Shipley when the event had become three-handed. The Finn then knocked out Solihull’s Shipley ($369,575) soon after to secure his heads-up clash against Lamb.

Lamb was the chip leader on 6,650,000 while Kelopuro held 4,180,000 – and the American immediately extended his lead to go beyond seven million, although Helsinki’s Kelopuro did fight back to almost even, before actually taking the lead.

But Lamb – who also recorded a 14th place finish in the main event two years ago for $633,022 – stole back the lead just before the final hand arrived.

On the button, Kelopuro opened with 240,000 and Lamb called in the big blind. The flop came As-9h-3d and Lamb check-called Kelopuro’s 275,000 bet. The Qs came on the turn and Lamb once again checked, while Kelopuro threw in 675,000, only for Lamb to raise the pot. Kelopuro did not look happy, but still re-raised all in, with Lamb swiftly calling.

Kelopuro showed Ac-Qc-Kd-7d to hold top two pair, while Lamb revealed 6s-5h-4s-2d to have draws to a straight and a flush – and it was the latter that got there when the 5d arrived on the river for a wheel to eliminate the Finn in second place for $503,173.