Ben Jones wins the GUKPT Bolton Main Event – one of the few major tournaments in the UK to be played using the 6-Max format. 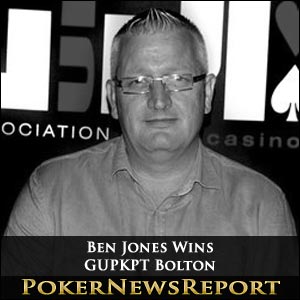 Ben Jones wins the GUKPT Bolton Main Event – one of the few major tournaments in the UK to be played using the 6-Max format.

The World Series of Poker in Las Vegas may be having a temporary hiatus until the end of October, but there was no shortage of quality poker in exotic surroundings this weekend as the Grosvenor UK Poker Tour hit Bolton.

114 players entered the feature 6-Max Main Event, creating a prize pool of £57,000 and although some might have missed the presence of Ivey, Negreanu and Hellmuth contesting multi-million dollar tournaments, UK poker stalwarts Pete Wigglesworth, John Eames and DTD´s Simon Trumper helped turn the weekend into a memorable event.

Sadly all three players were eliminated in a hectic first day on Friday, which was bossed by Mattia Ghera who took 176,900 chips into Day 2 (average 69,000) – 30 big blinds ahead of the chasing pack of thirty-five lead by Simon Wolf, Ben Jones and Si Crawley.

Lee Foster quickly made ground on Mattia Ghera on Saturday, flopping a set of sixes to eliminate Simon Taberham, and Ben Jackson also got into the act – twice doubling up against Liam Hooks with A-J against A-10 and K-K against J-10.

But Saturday afternoon was to be Mattia Ghera´s day afternoon and, after eliminating Richard Connolly and Gavin Markham in consecutive hands, he came from behind with A-Q to river a straight against Ash Hussain (A-K) – eliminating the winner of the GUKPT Tournament of Champions in 2008.

By the time the field was reduced to eighteen, Mattia Ghera had established a commanding advantage.

With only eleven places getting paid, the pace of play slowed down to a crawl, and it was not until the fringes of the bubble that the dynamics of the tournament changed.

Liam Gets His Hooks into Ghera

Having been moved to Mattia Ghera´s table, Liam Hooks doubled up when his A♦ Q♦ found 10♦ J♦ 5♦ on the flop to master Ghera´s set of tens, and then Dave Wearing (Q-Q) did his prospects of victory no harm with the dual elimination of Michael Colling (9-9) and Barry Cooper – Colling being the Bubble Boy on the strength that he had the least chips entering the hand.

Mattia Ghera also doubled up Steve Holden (A-Q), when his 8-6 on a flop of 5-7-Q failed to improve, while Ben Jones took a gamble with pocket threes and held to eliminate overnight second place Simon Wolf. By the end of Saturday, the event was down to the final seven – with Mattia Ghera the shortest stack of all!

For a short time on Sunday, it looked as if the title of GUKPT Bolton Champion was going to Liam Hooks. He was quick off the mark to bust Steve Holden when his 10♣ 10♥ held against Holden´s A♣ J♣, but after Nigel Booth had crippled Mattia Ghera with trip 10s, and then Ghera was bust when his A♠ 5♣ failed to hit against Chris Hughes 9♥ 9♣, Liam Hooks was next to leave the tournament – running his A♠ Q♠ into the A♥ K♥ of Ben Jones on a rainbow board.

Despite Dave Wearing getting an early double-up when holding pocket 10s, the battle was somewhat unequal and lasted less than 30 minutes – Ben Jones tabling A♥ J♥ and holding against Dave Wearing´s shove with Q♣ J♠ in the final hand to claim the title of GUKPT Bolton Champion and a winner´s cheque for £17,390.