The PokerStars-sponsored UK and Ireland Poker Tour Main Event in London got off to a cracking start yesterday as 194 players entered the first of three Day 1s. 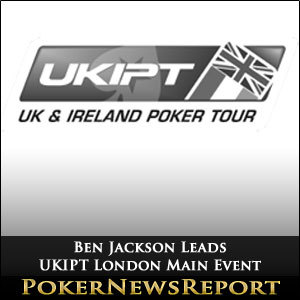 The PokerStars-sponsored UK and Ireland Poker Tour Main Event in London got off to a cracking start yesterday as 194 players entered the first of three Day 1s.

This is the first time that the UKIPT London has not been included as part of the EPT festivities which start next week and, with the exception of the UKIPT events hosted at Nottingham´s Dusk till Dawn Club, this Main Event could be the most popular yet.

194 players ponied up the £770 buy-in or qualified online at PokerStars to compete in the event, leading organisers to believe that the total number of entries come Thursday – when the last of the three Day 1s is played – could top the 1,000 mark.

Of those 194 players, 43 survived eleven one-hour levels and will return on Friday for Day 2. End-of-day chip leader Ben Jackson will be coming back with a healthy 197,700 chips, while other notable players making the return trip to the Grosvenor Victoria Casino in London include last weekend´s winner of the Genting Big Game Nik Persaud (67,800 chips) and UKIPT Champion of Champions Richard Sinclair (65,400 chips).

Among those who will be looking for other pursuits over the weekend (i.e. they were eliminated) are Julian Thew, Neil Channing, Chris Bjorin, Sam Grafton and Kevin Allen – who looked like he was going to be one of the early pacesetters until his 10♦ 10♠ was rivered by Tim Clarke, who had been the pre-flop and post-flop aggressor with 10♠ 5♠ on a flop of 2♦ J♠ 8♦, and then hit runner – runner trips (5♦ turn / 5♥ river) to bust a very angry Kevin Allen out of the tournament.

Looking Ahead to Day 1B and Day 1C

The next two days of the UKIPT London Main Event promise to be even better attended. A host of Team PokerStars Pros were in town for the opening of PokerStars´ LIVE at the Hippodrome Casino on Monday including Jake Cody, Liv Boeree and Victoria Coren, while hundreds of international poker stars are arriving in London ahead of the EPT and the Team PokerStars -v- The Professionals Challenge on March 10th.

While those players are battling through two tough days of poker, Ben Jackson will be looking forward to Friday when he – and other players at the top of the Day 1A chip counts – will find out just how close they are to taking home a piece of the £250,000 guaranteed prize pool.

End of Day 1A Chip Counts