Ben Foxwell dominated the final table of the UK Student Poker Championship to capture the £3,540 prize and a seat in the GukPT Grand Final worth another £2,000. 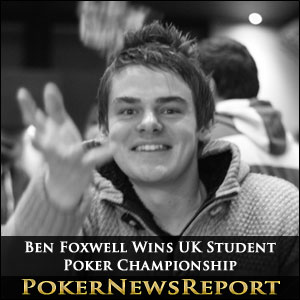 Ben Foxwell dominated the final table of the UK Student Poker Championship to capture the £3,540 prize and a seat in the GukPT Grand Final worth another £2,000.

The conclusion of the biggest ever UK Student Poker Championship was played out last night in the G Casino in Coventry´s Ricoh Stadium and, in the event´s nine-year history, nobody has ever dominated a final table like Ben Foxwell.

Ninety-eight players had returned to the G Casino for the second and final day of the UKSPC, with Foxwell (115,725) fifteenth in chips behind runaway Day 1A chip leader Andrew Symeou (392,100) and Day 1B chip leader George Heaton (191,100).

However, once Symeou, Heaton and UKSPC Hi-Roller Champion Simon Pridiss got seated together on the same table, it gave others the opportunity to mount their challenges by taking advantage of the shove or fold strategies used by the short stacks.

By the time the tournament became nine-handed, Matt Takaro had taken the chip lead courtesy of busting Oliver White (AA > AK), while Ben Foxwell had moved up to second partly due to rivering a straight against Martin Radev (77 > KJ). George Heaton had the misfortune to run his AQ into the AK of Arthur Villa to be sent to the bar in thirteenth and, when the final table was set, the chip counts looked like this:-

His single-handed demolition of the UKSPC final table continued by sending Matt Butcher to the rail in seventh after flopping two pairs (J10 > A7), out-bluffing Simon Priddis in sixth (KQ > Q4) and out-kicking Sunny Kalcutt in fifth (KJ > K10).

Han Zhang was the unfortunate player to next run into the “Foxwell Force” – not being able to improve his K3 against Ben Foxwell´s pocket Sixes – and, when Foxwell flopped a Queen for a set against the A8 of Matt Takaro, he was left in the comfortable position of taking a 10:1 chip advantage into the heads-up against Lucas Durney.

Ben Foxwell made short work of Lucas Durney in the heads-up, but in fortunate circumstances. Durney moved all-in with K♦ 3♠ and was ahead of Foxwell´s J♣ 10♥ after the flop of A♣ 6♠ 5♣. The 9♣ on the turn gave Foxwell a potential flush draw and the 10♠ on the river paired his hand to make him UK Student Poker Champion 2013.

469 players entered, re-entered or qualified online for the GukPT UK Student Championships, creating a prize pool of £14,070 and rewarding the top 50 players with a min-cash of £40.00. The two Day 1 chip leaders also got £100.00 bar credit and the top performing university poker society (UCLan with five cashes) picked up bonus seats to the GukPT Goliath at the Ricoh Stadium in August.

When all the chips were put away and the vodka shot glasses had been washed up, the top payouts were as follow:-