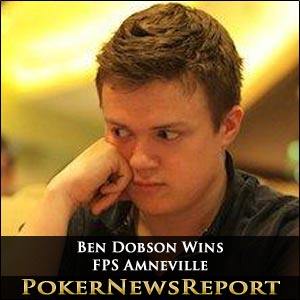 The Stockport-based Ben Dobson – who has been playing online poker for five years – outlasted 316 opponents, including big-name French Team PokerStars Pros Arnaud Mattern and Bertrand ‘ElkY’ Grospellier, on his way to the claiming title during the fourth leg of the tour’s fourth season in northern France.

Dobson, who is originally from Nottingham, ultimately overcame French online qualifier Guillaume Roiron in their three-hour heads-up encounter – which didn’t end until close to 3am – once Germany’s Johannes Meyer Zu Wendischhoff had been eliminated in third place for $38,903 from what had been an eight-handed final table at Casino d’Amneville.

Still, while disappointed not have secured victory from his debut live tournament final table, Roiron will certainly be happy to have turned his $50 satellite seat into $57,473 for his runner-up spot.

Fifteen players began the final day, but only eight could make the final table, meaning Germany’s Jean-Yves Malherbe was the unfortunate bubble boy, although he did leave with $7,781 in ninth place.

Two hours later, Belgian Marc Huyghebaert (fifth for $24,898) and another Frenchman, Michel Dubert (fourth for $31,123), had also been eliminated to leave just three players in contention for the title, with 23-year-old Dobson eventually taking home the top prize for his second crown after having secured $30,034 back in June of last year for winning the $550 buy-in No-Limit Hold’em Position Poker event as part of the Deep Stack Extravaganza III in Las Vegas.

London-based Triple Crown winner Grospellier and Parisian Mattern, meanwhile, failed to cash as 36 players were paid from a $394,637 prize pool. Frenchman Cedric Schwaederle was the first player to make the money, picking up $2,140 (€1,650).

The fifth stop of this current FPS season pulls into Gujan-Mestras for five days from June 27 to July 1, when there will again be a €1,000+€100 buy-in No-Limit Hold’em main event staged.