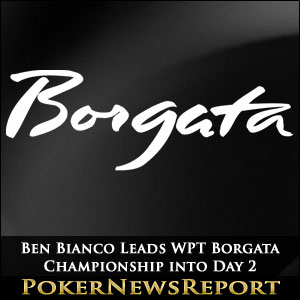 The two opening flights of the $3,500 buy-in WPT Borgata Championship saw 1,226 players enter the event and make it the fourth biggest tournament ever to be played on the World Poker Tour. With such a large entry, the $3 million guarantee was smashed and a total prize pool of $3,924,426 was created which will be shared between the top 120 players.

With almost 600 players still alive in the event after eight levels of play were concluded on the two Day 1s, it will take a couple more days of action until the money bubble is burst; but, going into Day 2, one player in particular – Ben Bianco – has a superb opportunity to take down the $843,744 first prize.

Bianco Takes Lead in Last Hand of Day 1A

Ben Bianco comes from New York and he likes playing at the Borgata – more than half of his lifetime cashes have come from Borgata Open events, including a victory in a side event two years ago which contributed over $300,000 to his lifetime earnings. However, Bianco is more than a one trick pony, and has cashed in three previous WPT Championship events – including a fourth place finish in 2006 for $60,750.

Bianco had chipped up fairly well throughout Day 1A of the WPT Borgata Championship, but he stormed into a massive chip lead on the last hand of the night when scoring a double K.O. with a pocket pair of Kings over an opponent who had hit top pair on the flop of 7♠ 3♥ 3♠ and a second opponent who had a pair of Nines. Victory in the hand catapulted Bianco to 389,000 chips – way cleat of his two closest rivals Andrew Atkinson (234,900 chips) and Allyn Shulman (231,200 chips).

Darlene Lee Takes the Honours on Day 1B

Day 1B saw a lot more players enter the WPT Borgata Championship than Day 1A but, with no further opportunities to re-enter, the nature of play was more subdued that on the first opening flight. Consequently, when Darlene lee bagged up 254,900 chips after eight levels of play, she was still an incredible 223 big blinds behind the chip leader.

Looking Ahead to Day 2 of the WPT Borgata Championship

Seven more levels of action are scheduled for Day 2 of the WPT Borgata Championship and, when players take their seats at the Borgata Casino this afternoon, they will be entering Level 9 of the event (blinds 400/800 – ante 100).

The goal for most players will be to make it through the day with a reasonable stack to survive into Wednesday and through the money bubble. However, for Ben Bianco and those at the top of the WPT Borgata Championship leaderboard, the challenge will be to keep their chip stacks intact!