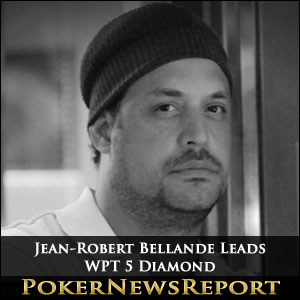 Five more 90-minute levels were played during Day 4 of the WPT Doyle Brunson Five Diamond World Poker Classic yesterday, during which time the 45-player money bubble burst and Jean-Robert Bellande moved into a substantial chip lead over the twenty-one players who survived the day.

It was also the day on which ClubWPT qualifier Amy Barish came heart-breakingly close to turning her annual $239.00 subscription into a $21,700 payday, and Antonio Esfandiari also hit the rail without cashing – the first time in six years he has failed to make the money!

Poor Start for the Chip Leaders

Going into Day 4 of the WPT Five Diamond Poker Classic, Don Nguyen had a handy chip lead over John Holsonback and the other fifty-seven players who had survived the first three days of action. However, Nguyen´s stack took a substantial knock in the first level of play (blinds 2,000/4,000 – ante 500) when doubling up Shaun Suller, after Suller flopped a Full House with his pocket Fives.

Holsonback also experienced a poor start to Day 4 – getting involved with 10♠ 10♥ in a three-way pot against Alexander Condon (A♥ K♣) and Trevor Pope (A♠ Q♠). Condon flopped the K♦ to win the hand and virtually triple up, while Holsonback lost more than 100,000 chips, and Pope was eliminated (that´s what you get for playing Ace-Queen!).

Among the other pre-bubble KOs were two players who had attracted significant attention throughout the early stages of the tournament. Antonio “The Magician” Esfandiari had cashed in the five previous WPT Five Diamond World Poker Classic Events – during which time he had won once and appeared on the final table on two further occasions – but the magic failed to work when he moved all-in with A♠ 9♥ and failed to improve past Matt Glantz´ K♦ K♣.

Amy Barish had qualified for the event on the subscription poker site ClubWPT and had taken a stack of 94,000 chips into Day 4 of the tournament. However she was eliminated just a few spots before the money when moving all-in with 7♥ 7♦ on a flop of 6♦ 4♣ 2♠ and getting a call from Barry Hutter J♣ 6♣. Although ahead after the flop, the J♥ on the River gave Hutter two pairs and cruelly eliminated Barish in 49th place.

Kevin Eyster is the Bubble Boy

Ironically, Matt Glantz was also eliminated short of the bubble when running his A♠ K♥ into the A♦ A♥ of Dan Martin – a hand which moved Martin into the chip lead – and hand-for-hand play saw Martin, Keith Tilston and Brian Rast increase their chip stacks substantially as they took advantage of other player´s reticence to get involved in big pots.

At that time Jean-Robert Bellande Tweeted

On the money bubble. @tsarrast [Brian Rast] is absolutely terrorizing the table with his monster stack (650k). I have 280k (avg).

Kevin Eyster was eventually to be the “bubble boy” and eliminated out of the money in another cruel twist of fate. Eyster had got the last of his 88,000 chips in with K♠ K♥, and looked good to double-up against the J♥ J♦ of Steven Silverman until the J♣ spiked on the River. Eyster was bust from the WPT Five Diamond World Poker Classic Event in 46th place, and the remaining forty-five players were assured of a $21,700 min-cash.

The typical post-bubble rush to the cashier´s desk failed to materialise, and many of the players that were eliminated during the following level were just plain unlucky. Michael Benvenuti was the next player to bust after moving all-in with J♣ J♠ and finding chip leader Dan Martin waiting for him with A♦ A♠, and Jeff Madsen (5♥ 5♦) called Steven Silverman´s (A♦ K♣) shove on a flop of K♠ J♠ 5♣, only for Silverman to River the K♥ to bust Madsen in 39th place.

Another bad beat was responsible for the elimination of overnight chip leader Don Nguyen (K♣ J♠) in 37th place, after Nguyen had flopped top pair against Ben Palmer´s pocket Sevens, but the 7♠ spiked on the River to give Palmer a set; and Dat Luu looked favourite to double up against Robert Salaburu in an A♣ Q♣ -v- A♠ 4♦ confrontation, but the 4♥ on the flop ended Luu´s participation in the event in 36th place.

The final two levels of play saw some significant movement at the top of the leaderboard. Joe Serock improved his chances of a final table appearance when busting out Corrie Wunstel Q♦ Q♠ > A♣ K♣, and Keith Tilston moved over the one million chip barrier when eliminating Mohsin Charania J♦ J♥ > A♠ K♦. However, the biggest climber up the leaderboard was Jean-Robert Bellende.

Since the bubble had burst, the respective fortunes of Brian Rast and Jean-Robert Bellende had reversed (see Bellende´s Tweet above) and both players were now sitting with fairly level stacks of around 500,000 chips. Rast had been the aggressor in the pre-flop betting – shoving all-in with A♥ 10♥ – and Bellende had an easy call to make with A♦ A♠. There were no surprises on the board, and Rast was sent to the rail in 32nd place.

Players continued to be eliminated in “standard” fashion, such as John Holsonback – 10♥ 10♦ < J♥ J♠ of Andy Philachak – and Robert Salaburu A♠ 6♣} < 8♦ 8♠ of Dan Martin, until just twenty-one players remained at the close of play. When those twenty-one players return to the Bellagio this afternoon, they will be entering Level 21 (blinds 6,000/12,000 – ante 2,000) with the next player out collecting a pay check of $30,379. Play is scheduled to continue until a final table of six has been set, and those most likely to appear on it include: