The Belgian Gaming Commission (BGC) wants to ban the casino and poker applications which allow the user to gamble for free on their mobile devices. 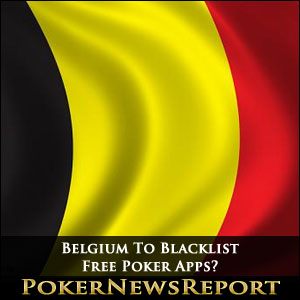 The Belgian Gaming Commission (BGC) wants to ban the casino and poker applications which allow the user to gamble for free on their mobile devices.

Belgium has taken the fight against the online gambling industry to a whole new level. Not only did the BGC clean up the Internet environment, forcing any gambling operator to partner up with a land-based casino, but now the commission has the eyes set on the mobile application niche, more specifically the free gambling apps.

According to law firm DLA Piper’s representatives, Antoon Dierick and Patrick Van Eecke, the BGC is currently trying to restrict the offering of free gambling apps to its citizens targeting all games where participants need to place a wager in order to play. This, of course includes any type of poker games available in various online stores.

The commission sees such apps as problematic because the age of the gambler cannot be verified in any way, thus these games could very well influence the minors and induce addictive behaviors.

Like almost four years ago when the amended Belgian gambling legislation entered into force and the notorious online gambling blacklist was established, the BGC proposes the creation of a new blacklist, this time applied to operators offering gambling apps.

This is not good news for the application developers. The online gambling blacklist filled quite rapidly in the last several years from just a few sites to a total of 97, as per March 12, 2014, including big names from the poker industry like Everest, Titan, 888, Winamax, Betsson, William Hill, Betfair, PKR, and Betsafe.

The few gaming companies that operate legally in Belgium made partnerships with land-based casinos and launched fully localized websites in French and Dutch. PokerStars is the biggest poker player on the Belgian market striking up a deal with Circus Group not long after the new gambling law was brought into force.

For the mobile application developers, the only way out seem to be the integration of some age verification tools in order to restrict their casino and poker apps only to those legally eligible to gamble.

For the Belgian poker players though, the future is gloomier by the day. They do not only have to fight the harsh rules of the GBC that include fines up to €25,000 for playing on the illegal gambling sites (not to mention other ‘promises’ made by the commission earlier this year which include bigger fines and even imprisonment) but also they have to give explanations to the tax authorities.

Just three days ago, the Belgian fiscal administration launched a full-out attack on the biggest poker winners. According to hln.be, the tax authorities want to tax Belgium’s top pros up to 75% of their poker income (including penalties). And by top pros they mean around 20 players who play professionally and have accumulated considerable winnings over the years.

The other pros and semi-pros and amateur winning players can relax…for now. They won’t pay any taxes if they are winning. But can they rest assured about the foreseeable future?