Belgian online poker players will wake up this morning to find the long list of “black-listed” online poker rooms just got longer. 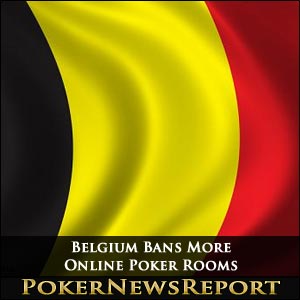 Belgian online poker players will wake up this morning to find the long list of “black-listed” online poker rooms just got longer.

An ever-growing roster of 30 black-listed [geolink href=”https://www.pokernewsreport.com/online-poker-rooms”]poker sites[/geolink] has been provided by the Belgian Gaming Commission to the four leading Belgian internet service providers, who have been given instructions to block traffic to and from the poker web sites on the list.

Bans Backed Up By Fines

Those internet poker companies on the black-list have also been told that if they continue to provide a service to Belgian residents they could be fined as much as 100,000 Euros for each indiscretion. What is more; to ensure that Belgian nationals do not play on the sites, the Belgian Gaming Commission has criminalised playing on any non-approved online poker site with players failing to adhere to the regulations facing a fine of up to 25,000 Euros.

Who Are These Belgian Bad Boys?

Whereas you might think it admirable of the Belgian Gaming Commission to ban companies who may prove to be unstable and place players´ funds at risk, the list of black-listed poker sites includes many of the world´s leading online poker sites including 888, Party and William Hill. Online poker players in Belgian are now only allowed to play at poker rooms which have been approved and appear on the Belgian Gaming Commission´s “white list”.

How to Get Belgian Approval

In order to be approved by the Belgian Gaming Commission, online poker sites have to partner with an established brick and mortar casino located in Belgium. According to the World Casino Directory there are only eight casinos in Belgium; which makes it very difficult for many Internet poker sites to get approval and form a competitive market. The fact that only three have bothered implies that the Belgian online poker market is not considered to be worth bothering with.

And the Lucky Three Are …

It was no surprise to see that PokerStars.be was the first online poker company to be approved by the Belgian Gaming Commission, nor that – due to the strong ties between France and Belgium – that Partouche.be were also granted a license. The third online poker site at which poker players in Belgium will be allowed to play is GPWin.be (trading as Golden Casino) which looks as if it will be the only skin on the iPoker network available in Belgium.

Not All Bad News for Belgian Poker Players

There was some good news for online Belgian poker players amongst the new regulations. Unlike in France, Italy and Spain – where players from these countries will be ring-fenced – players in Belgium playing on approved .be sites will be included in the player pools from the rest of the world and therefore able to take part in the major tournaments on PokerStars, Partouche Poker and hosted on the iPoker network.

Just as well, because some SnGs might take an awful long time to fill up if not!