Behm Leads WPT Venice – Thanks to the River

US player Stephen Behm has the chip lead after Day 1A of the WPT Venice Main Event due to a fortunate Ace on the river in one of the last hands of the night. 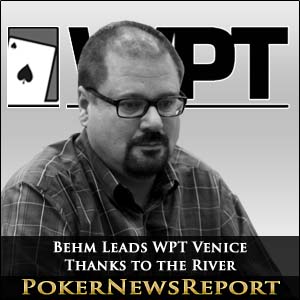 US player Stephen Behm has the chip lead after Day 1A of the WPT Venice Main Event due to a fortunate Ace on the river in one of the last hands of the night.

Behm´s chip advantage over second placed Marvin Rettenmaier (129,600 chips) amounts to more than 97 big blinds, yet it could have been the German who was (once again) grabbing the headlines after his Aces > Kings elimination of WSOP Main Event runner-up Martin Staszko and the A♥ 9♥ > K♥ 5♥ flopped flush destruction of Anssi Mustonen.

Quality not Quantity at WPT Venice

Behind Behm and Rettenmaier are a series of well-known poker professionals. Mike Sexton (99,900 chips) finished the evening in third place after chipping with the elimination of Henri Koivisto (A♠ K♠ > A♦ Q♥), while Party Poker colleague Kara Scott also enjoyed a successful day – bagging up 81,200 chips after finding A♦ A♣ in level 1 to cripple Filippo Bergamasco (A♥ K♦) having flopped Quad Aces in the first hand of the day.

Others among the 32 players who survived Day 1A of the WPT Venice Main Event include 2011 WPT Venice Champion Allessio Isaia (39,900 chips), last year´s WPT Paris victor Matt Salsberg (15,900 chips) and Dan ‘Jungleman’ Cates – who finished the day on a lowly 13,000 chips after having his A♠ A♦ cracked by Erion Islamay (9♠ 9♦), who flopped a set of Nines and rivered Quads.

Players who bust out on Day 1A have the chance to re-enter the €3,300 Main Event on Day 1B and, in addition to those mentioned above, that option will exist for other notables players such as Andrey Pateychuk, Guillame Darcourt and Ben Pollak – who was among the first of the players to be eliminated after running his Q♣ Q♥ into the K♣ K♠ of early chip leader Artem Litvinov (Litvinov was third in last year´s EPT San Remo).

The Casino di Venezia is also anticipating the arrival of Phil Hellmuth – who flew into snowy Venice at the weekend – while Roco Palumbo, Gianluca Trebbi and Liv Boeree are also in town to compete in the World Poker Tour Venice Main Event.