Jonathan Evans stunned the poker world on Saturday – winning the opening event of the Borgata Poker Open having never played in a live poker tournament before! 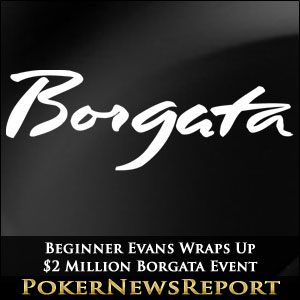 Jonathan Evans stunned the poker world on Saturday – winning the opening event of the Borgata Poker Open having never played in a live poker tournament before!

The opening event of the Borgata Poker Open series was a $560 buy-in NL Hold´em tournament with a $2 million guaranteed prize pool. Over five opening flights, 4,158 entries were received for the tournament – with the top 400 receiving a min-cash of $1,059.

The bubble burst during the first level of Day 2, when Kevin Choe´s pocket Jacks failed to overcome Sean Brown´s pocket Queens, and thereafter players departed at a fast rate until just ten remained. When the final table was set, chip leader Aaron Massey had 38% of the chips in play – courtesy of crippling former chip leader Steven Robertine (eventually bust in sixteenth place) and then busting Byron Washington Q♦ J♣ > 10♠ 9♠ in thirteenth place to win a 6 million chip pot.

One Goliath and Nine Davids

The opening event of the Borgata Poker Open was notable for being the first time a final table had been live streamed and, at the start of play, the three primary commentators – Ebony Kenney, Matt Salsburg and Scott Baumstein – could not see beyond Aaron Massey as the winner. Massey has more than $2 million in live poker winnings and came to the final table less than three weeks after winning the Heartland Poker Tour Main Event in Chicago.

By comparison, his closest opponent – Jonathan Evans – had never before played in a live poker tournament (his previous poker experience was online when he was at college) and he was only in Atlantic City because his mates were going, he had not taken a holiday in six years, and it “sounded like a good time”. Of the remaining players, Alex Smith had a sequence of results at the Borgata stretching back over five years for lifetime earnings of $332,000, while Kevin Grabel and Andrew Klein also had lifetime earnings creeping into six figures.

Bright Start for Haggerty as She Knocks Out Two

When the action got underway there were eleven minutes remaining in Level 35 (blinds 150K/300K – ante 40K) and three players departed in quick succession. Andrew Klein managed one double up against Guarav Raina before running K♥ Q♠ (on a King-high flop) into Pablo Alvarez´ pocket Aces to be eliminated in tenth place.

Patti Haggerty then bust Joseph Felice A♦ Q♦ > A♣ J♦ when both players missed the board, before eliminating Kane Kalas in eighth place J♦ J♣ > 8♦ 8♣ to chip up to 15 million chips. However, other than the eliminating hands, Aaron Massey was bossing the final table and had built his chip stack up to 26.9 million chips by putting players under pressure and forcing them out of the majority of pots. With some big pay jumps between first place and seventh place, nobody wanted to bust out by making a reckless call.

Big Slick no Good for Grabel – Haggerty Goes on a Heater

Kevin Grabel was the next player to leave the final table. Having had his chip stack sliced in half when doubling up Guarav Raina 3♣ 3♥ > A♣ K♠, Grabel moved the last of his chips in against Alex Smith. This time Smith was playing Big Slick (A♠ K♦) and Grabel´s K♣ 5♠ could not find the cards to improve past Smith´s hand – Grabel out in seventh.

Jonathan Evans made his first notable contribution to the final table – doubling up against Alex Smith (A♦ 10♠ > 10♦ 10♣) before Patti Haggerty went on a heater – crippling Alex Smith (3♣ 3♦ > A♣ K♥) when flopping a set of Threes, and then eliminating both Smith and Pablo Alvarez in a three-way pot in which Haggerty´s A♥ Q♠ held against Smith´s K♥ Q♦ and Alvarez´ A♠ 2♠.

For the first time at the final table, Aaron Massey was knocked off the top of the leaderboard as the players took a break at the end of Level 39 (blinds 400K/800K – ante 100K).

Massey Gets Back on Top, but Evans Leads Going into Heads-Up

After almost nine hours of final table action, it took just twenty minutes to reduce the remaining four players to a heads-up climax. Aaron Massey took over again at the top of the leaderboard when doubling up against Patti Haggerty K♣ Q♦ > K♠ J♣, and the last of Haggerty´s chips went in with 10♥ 2♣ against Jonathan Evans´ 10♦ 9♠. Evans completed a Jack-high straight on the Turn, and Patti Haggerty was bust in fourth place.

Guarev Raina felt he had found the ideal opportunity to get his last 15 million chips into the middle with A♣ J♥ and Jonathan Evans made the call with 6♣ 6♠. Evans flopped a set of Sixes to send Raina to the rail in third place and take a 42.78 million -v- 40.38 million chip advantage into the heads-up against Aaron Massey.

Going into the heads-up, both players had approximately forty big blinds, and this resulted in a fairly even period of play in which one player would take down a hand with a min-raise before the situation was reversed and the other player would win a small pot.

As the blinds rose to 600K/1,200K, Jonathan Evans opened up a narrow lead before losing it with a failed bluff. Aaron Massey took a 16 million chip advantage when rivering a King-high straight, but then Jonathan Evans doubled up 6♠ 6♥ > 2♠ 2♥ to regain the chip lead and reduce Massey to twelve big blinds.

The final hand saw Massey moving all-in pre-flop with 10♦ 10♥. Evans contemplated for a while before making the call and turning over K♠ Q♥. The flop of 5♥ Q♠ 8♦ put Evans firmly ahead in the hand, and with no Ten appearing on the Turn (5♣) or River (A♠), Jonathan Evans had pulled off one of the biggest shocks in recent poker history by taking down the $2 million guaranteed opening event of the Borgata Poker Open.