After two days of action at the WPT Mazagan Main Event, Clement Beauvois has the overall chip lead in the smallest field for a WPT Event for almost two years. 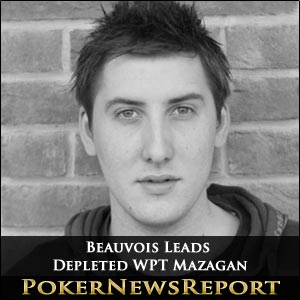 After two days of action at the WPT Mazagan Main Event, Clement Beauvois has the overall chip lead in the smallest field for a WPT Event for almost two years.

Mazagan is an absolutely stunning resort on Morocco´s Atlantic coast – about 40 miles south of Casablanca and just over 100 miles from exotic Marrakesh. The trouble is that it is appallingly difficult to get to except from France and the South of Spain (and not cheap either) and consequently very few of the world´s leading players bothered to turn up.

While new records were being set at the WPT Montreal, only 146 players registered for the WPT Mazagan Main Event over the two Day 1s – 81 of who survived to take their seats today when play resumes at 1.00pm local time. Chip leader, Clement Beauvois, emerged from some late scrapping in Level 8 (Day 1B) against Johan Guilbert and Sebastien Compte with 166,800 chips and has a handy lead over Alain Roy (153,100 chips) and Leonard Truche (131,000).

Stars Go Up, Stars Come Down

The big names taking part in the WPT Mazagan Main Event enjoyed mixed fortunes. Guillaume Darcourt (134,800 chips) finished on top of the Day 1A entrants after taking the last hand of the night, while Fabrice Soulier (126,800 chips) and Paul Tedeschi (94,700 chips) also enjoyed profitable Day 1As. Roger Hairabedian and ISPT ambassador David Benyamine had stinkers on Day 1A and, although both re-entered on Day 1B, Hairabedian finished with a modest 19,400 chips while Benyamine´s stakers might be considering the wisdom of entering into an alliance with the ISPT.

Not a Good Day to Party Either

Party Poker´s WPT ambassador Kara Scott arrived at the Mazagan Beach and Golf Resort nursing a migraine, but not one bad enough to stop her taking an early chip lead when her pocket Aces turned a set to crush Ali Ziad´s flopped set of Nines. Sadly for Scott, the “home team” got their revenge of her in Level 2 – Mehdi Mahrach flopping a straight for a valuable double up and then Sebastien Compte taking the remainder of her chips in an AA > AK race.

Day 2 of the WPT Mazagan Main Event is anticipated to be a short affair. Play resumes on level 9, with blinds of 400-800 (ante 100) and the remaining 81 players will play on until only 27 are left. Because of the small size of the field, only 18 players will cash in the event, so there will no loitering around today waiting for the bubble to burst. Those closest to the money at this early stage include:-