The four leading online poker sites in New Jersey have each announced new initiatives to maintain their market share as traffic in the Garden State flatlines. 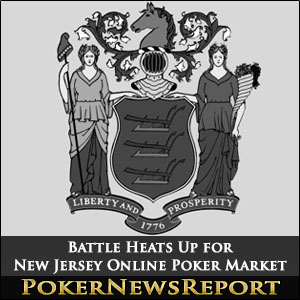 The four leading online poker sites in New Jersey have each announced new initiatives to maintain their market share as traffic in the Garden State flatlines.

It was inevitable that a plateau would be reached in the New Jersey online poker market and, judging by the practically simultaneous launch of promotions by the four leading online poker sites, it appears that time has come.

Contradictory figures coming out of New Jersey have been influenced by the Super Bowl, the withdrawal from the New Jersey online poker market by the Merge Gaming Network and the weather; but there can be no denying that, when the leading online poker sites in New Jersey all launch new promotions at the same time, there is a motive behind it.

The most popular online poker site in New Jersey – Party Poker – has good reason to look over its shoulder in light of deteriorating numbers at the cash tables and criticism that its poker tournament schedule is not up to scratch.

The site recently made changes to its weekly feature $50,000 guaranteed tournament by bringing forward the start time (to 5:00pm) and condensing the earlier levels to facilitate an earlier finish. Now it has announced a one-off tournament with a $100,000 to be played on March 2nd with satellite qualifiers available for a buy-in of just $5.00.

Unfortunately Party Poker´s “big” announcement was over-shadowed by the release of the schedule for the 45th Annual World Series of Poker – and the launch of online satellites into many of the bracelet events.

Players at WSOP.com in New Jersey and Nevada have already had the opportunity to play in qualifiers for the $10,000 buy-in Main Event every Wednesday and Saturday, but satellites are now also running with seats in many of the supporting events up for grabs.

888Poker has been the exception to declining numbers at the virtual cash game tables in New Jersey, courtesy of its 80% rakeback offer that was introduced in January and which runs through to the end of April.

The site is also offering around the clock freerolls throughout February, with more than $50,000 up for grabs in guaranteed prize money. Entry into the freerolls is only available to depositing players or those who complete various daily challenges, so the “freeroll promotion” is actually bringing more money to the site rather than draining money out of it.

Despite being the first of the regulated sites to launch in the US, Ultimate Poker share of the New Jersey online poker market has been minimal. The site hopes to change its fortunes by introducing “Two Street Poker” tomorrow (Friday 14th) – a game with a pre-flop round of betting, all five community cards being dealt at the same time, and then one final round of betting.