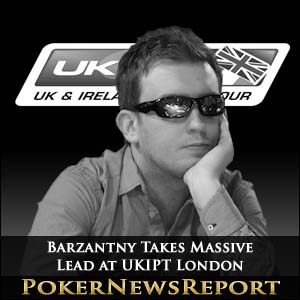 Barzantny admitted he enjoyed some good fortune during the day – once coming from behind with pocket Eights in a 80 blind pot to beat pocket Tens, and later making a huge pre-flop call with A♣ K♣ (> Q♠ J♦) to win another big pot and take the chip lead.

Another Big Field at the Vic

As was anticipated, a sell-out Day 1C pushed the total number of players in the UKIPT London Main Event over the 1,000 mark (1,099 to be precise) making it the largest live poker event to ever be staged in London; but it was not just the quantity of numbers that was impressive, it was also the quality.

Between them, players competing in the UKIPT London had previously won 8 WSOP bracelets, 12 UKIPT Main Events and 10 EPT titles and had totted up more than $171 million in live poker winnings. If you add the winnings from just the PokerStars Team Online Pros who forced themselves away from their computers to travel to London, that figure increases to well over $200 million.

The total number of entries led to a prize pool of £746,221 (after deductions) being created, with the winner of the UKIPT Main Event due to collect £156,800. 144 of the remaining 248 players will cash in the event (a min-cash worth £1,200) and – if the current rate of eliminations continues – the bubble should burst shortly after dinner on Friday.

When players take their seats at the Victoria Grosvenor Casino in London´s Edgware Road at noon today, Day 2 will be starting on Level 12 (blinds 600/1,200 – ante). The average chip stack has 66,500 chips in it and those least at risk of being blinded out before the first break include:-