History could be made today at the Gala Casino in Bristol today, as Wojtek Barzantny aims to claim his second UKIPT Main Event in the space of five days. 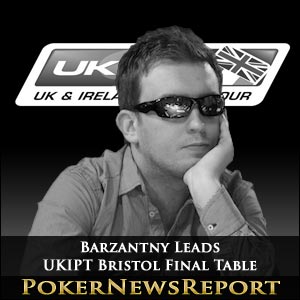 History could be made today at the Gala Casino in Bristol today, as Wojtek Barzantny aims to claim his second UKIPT Main Event in the space of five days.

The 24 year-old student from Kaiserslautern in Germany takes a chip stack into the final day of the PokerStars sponsored UKIPT Bristol Main Event twice the size of his nearest pursuers after a speedy Day 3 which saw a field of 45 reduced to just eight in less than seven hours.

Barzantny bossed the day from start to finish – busting Adrian Combes´ pocket Aces in one of the first hands of the day, when his pocket Tens found the 10♦ on the Turn, and then eliminating Simon Randall in the last hand of the day after Barzantny´s 8♦ 6♦ hit two pairs on the flop to master Randall´s Aces and collect a pot of almost two million chips.

Sandwiched between the dual eliminations, Barzantny was responsible for the departure of Joe Roberts (A♦ 9♠) when his K♦ J♦ turned trip Jacks, crippling last woman standing Amanda Sidark (A♥ 2♠) when turning trip Tens with 9♦ 10♦, and forcing Owen Lock out of a ½ million pot before taking the last of the local players chips with J♥ 8♥ > 9♠ 6♣.

Two Millionaires in the Chasing Pack

Incredibly, when the final eight players take their seats at the Harbourside Casino in Bristol, 24 year-old Barzantny will be one of the oldest players at the table. Only James Greenwood (29) and Jonathon Prince (27) can claim age superiority on the German, as three other final tablists are also twenty-four and two more – including Amanda Sidark – are just mere toddlers at twenty years of age.

With £90,400 up as first prize for the Main Event but only a £8,800 cash for the player out in eighth, observers should not expect a great deal of fireworks in the early stages of play when the final table starts. Wojtek Barzantny will have position on both Bull and Goddard, but has four of the shorter stacked players immediately to his left.