Joe Barton, whose proposed bill to legalize online poker is currently before Congress, is optimistic that online poker legislation can be approved during this term. 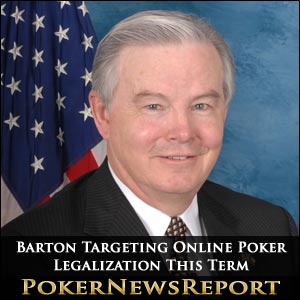 Rep. Joe Barton (R-TX), whose proposed bill to legalize online poker is one of two gaming bills currently before Congress, is optimistic that some form of internet poker legislation can be approved during this term in office.

“Our whole strategy is to get something on the president’s desk this Congress, so we have 13 months to go,” Barton said.

Joe Barton’s HR2366, also sometimes referred to in the poker industry as “Barton’s bill,” would regulate online poker in the U.S. through a series of state-run agencies. But Barton shies away from taking credit for the bill. He had been an advocate of online poker for several years, but remained quietly on the sidelines while the House majority consisted of Democrats, and allowed Rep. Barney Frank (D-MA) to lead the push for internet poker legalization. But the situation completely changed after last year’s election when the House became a Republican majority.

“When we switched over [to a Republican House majority], the Poker Players Alliance (PPA) and other stakeholders came to me and asked if I could make a bill,” Barton said. “My bill really is just building on several bills in the past introduced by Barney Frank and John Campbell (R-CA). It’s the next evolutionary step. I don’t feel pride of authorship because I’m building on the work others have done.”

Barton began playing poker as a 12-year-old in the Boy Scouts. He had a rough time at first, as do most players who are new to the game. You have to take your lumps before you catch on somewhat, it seems. Barton couldn’t win and was embarrassed in front of his badge-earning friends. He went home and asked his father to teach him the game, knowing that the senior Barton played poker often as a serviceman during World War II.

“I never had any problem in the Boy Scouts again,” Barton said.

That was how Barton came to the realization that poker was won by the more-skilled players and not merely a game of chance, as many who are not familiar with the intricacies of the game believe. Barton has, as of late, led the way in pushing for regulation of internet poker. In the last couple of months, he has championed the cause in two House subcommittee hearings on the issue.

Barton wouldn’t mind seeing the bill he is sponsoring make its way through the proper legislative channels, beginning with a subcommittee markup, followed by going through the House Energy and Commerce Committee in the spring of 2012, and finally, passage by the entire House of Representatives next summer. He also could visualize Senate Majority Leader Harry Reid grabbing the lead and nudging a bill through the Senate first.

After suffering through a devastating 2011, [geolink href=”https://www.pokernewsreport.com/us-poker-sites”]U.S. poker[/geolink] players have learned not to get their hopes too high. However, Barton is optimistic and confident. He believes the poker community and lobbying groups are making their voices heard to members of Congress sitting on the fence on the issue and are raising awareness with Twitter, Facebook and email campaigns.

“If we get it up for vote in the House, we have the votes,” Barton said. “I think we have the votes in the subcommittee, the full committee and on the House floor. It’s a little more dicey in the Senate because of the 60-vote requirement.”

But with a former Boy Scout leading the way, the prospects of online poker regulation are looking good.