Rep. Joe Barton (R-TX), the sponsor of a proposed bill aimed at legalizing online poker, was a keynote speaker at the two-day Digital Gaming and Lottery Policy Summit held in the nation’s capital this week and again espoused the need to pass online poker legislation during the current Congressional term. 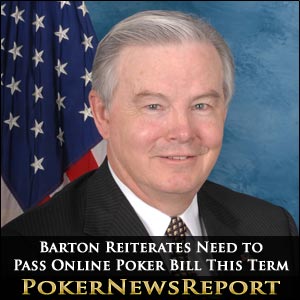 Rep. Joe Barton (R-TX), the sponsor of a proposed bill aimed at legalizing online poker, was a keynote speaker at the two-day Digital Gaming and Lottery Policy Summit held in the nation’s capital this week and again espoused the need to pass online poker legislation during the current Congressional term.

“One of the caveats that I asked the stakeholders before I created the bill was I want to get it done in this Congress, which means this year or next year,” Barton said. “The bottom line is we want to get to it as quickly as possible. The poker bill has a chance in this Congress.”

The Congressman addressed an assembly of gambling operators, policymakers, regulators and technology providers gathered together to discuss impending policy changes in the U.S. that may result in regulations of internet poker and gambling. Barton talked about the different ways that a poker bill could eventually become legislation.

“My best guess is that if we move our bill out of the Energy Commerce Committee there would be some sort of discussion between the Speaker of the House John Boehner and Majority Leader Reid in which they’ll try to reach an agreement on a vehicle over in the Senate,” Barton said.

Barton told the summit attendees that getting a bill passed through Congress is more times than not a very difficult process. He said it’s very likely that “if the House moves first, the Senate almost never moves at all, so we don’t want to move a bill through the House and have it just sit over there in the Senate, especially since for some of our members in the House, this is not a vote they would prefer to take.”

Barton also spoke about the possibility that a bill could be attached as a rider to another measure as was done with the Unlawful Internet Gambling Enforcement Act in 2006, which rode through on the tails of the SAFE Port Act. The super committee considered it last month, but poker legislation was never included in the final product. Barton also hinted about the outside shot of an attachment in the near future for passage, but implied that it is not a likely scenario.

Barton appears focused mostly on the bill meandering through the typical passage route out of the House of Representatives. “I think we have the votes in the House to get it through. If we get it to a vote on the floor of the House, I think it will pass,” said Barton. “A lot of this is politics and in this case it’s not Republican and Democrat politics. It’s more House and Senate politics. Is this something the leadership of both houses wants to spend time on in an election year? It is such a sensitive subject and there is some controversy about whether you should allow any type of internet gaming to go on at all.”

Barton readily acknowledges being a winning poker player most of the time, and dutifully sharing his winnings with his wife. Industry observers have wondered aloud as to how many Congressmen actually play poker, either online or in live poker games. In a light-hearted comment, Barton insisted that many Congressmen are poker players, though few will admit to it. “They just don’t play as well as I do,” he said.