Barry Greenstein and Linda Johnson have been voted into the prestigious Poker Hall of Fame, it was announced Thursday by the World Series of Poker (WSOP). 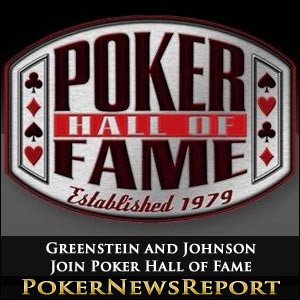 Barry Greenstein and Linda Johnson have been voted into the prestigious Poker Hall of Fame, it was announced Thursday by the World Series of Poker (WSOP).

The two newest poker immortals, now the 41st and 42nd inductees of the elite club, received the necessary votes from 18 existing Hall of Famers and 17 media members. The pair will be inducted officially on Tuesday, Nov. 8, at the Rio All-Suite Hotel & Casino as a precursor to the three-handed finish of the WSOP Main Event final table. The induction ceremony is scheduled for 4:30 p.m. in the Penn & Teller Theater.

Barry Greenstein is known in the poker industry for his achievements both on and away from the poker tables. He has amassed over $7.5 million in tournament winnings while earning three WSOP bracelets and two World Poker Tour championships. His peers regard Greenstein as one of the best cash-game poker players ever, while competing in some of the highest stakes poker games worldwide.

Away from the felt, Greenstein is equally admired for his contributions to charity. With donations from his poker winnings topping $3 million to various worthwhile charities, he has been dubbed the “Robin Hood of Poker“. Greenstein has also authored several books and is the father of six children.

“I’m happy to be inducted into the Hall of Fame alongside my friend Linda Johnson, who has been the most fervent ambassador for poker for as long as I can remember,” Greenstein said.

Linda Johnson, known as “The First Lady of Poker,” given that nickname by fellow Hall of Fame member Mike Sexton, has been a passionate supporter of poker since early 1980. She finished fifth in the first tournament she ever played at the WSOP and quit working at the U.S. Post Office to concentrate on becoming a professional player. She eventually won a bracelet in 1997, winning a $1,500 Seven-Card Razz event.

“I am extremely proud and humbled to be voted into the Poker Hall of Fame,” Johnson said. “I feel lucky to have been involved in many facets of poker over the past 35 years. Being recognized by the industry is a tremendous honor.”

The other eight 2011 Hall of Fame candidates who were not voted in this year are John Juanda, Annie Duke, Marcel Luske, Jennifer Harman-Traniello, Tom McEvoy, Jack McClelland, Huck Seed and Scotty Nguyen. All eight of the 2011 finalists will also be eligible for next year’s Hall of Fame nominations.