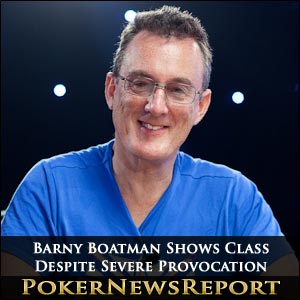 It’s not just the loss of hand that hurts, it’s the feeling that you were hard done by through no fault of your own. Rather, an opponent’s poor play has foiled your ‘deserved’ pot success.

Yes, we’ve all felt the pang of pain that follows such an occurrence, but how many of you have taken to microblogging website Twitter to lambast your ‘fortunate’ opponent? Sometimes it’s best to just put up and shut up.

Well, MacPhee – whose online handle is ‘ImaLuckSac’ – was unable or unwilling to do just that the other day after being eliminated from the final table at last month’s European Poker Tour (EPT) San Remo event, instead calling opponent Barny Boatman “fucking retarded”.

Let’s check out that hand before venturing deeper into the tweeting, shall we. In the small blind, MacPhee had appeared frustrated for quite some time when seeing the action pass to him and shoved his final 535,000 into Boatman’s big blind.

The Englishman, who looked his opponent over for a few moments, appeared to make a daring call with Q♠ 7♠ to beat MacPhee’s nine big blinds shove with 6♣ 5♠.

Following a flop of 3♠ 3♣ K♦, MacPhee turned a gutshot straight with the 2♣, but failed to beat Boatman when the J♥ arrived on the river.

MacPhee was out in eighth place for €63,694, while Boatman was right back in contention for the title.

Ultimately, the Hendon Mob member was eliminated in fourth place for €225,000, which, considering how long Boatman has been around the game, is his biggest career cash by a long way.

However, MacPhee, from Coeur d’Alene in Idaho, was not impressed by Boatman’s play and hit out at the Londoner on Twitter.

He wrote: “I fold 30 hands straight down to 530k then shove 9 bbs in the sb and @barnyboatman calls off with Q7s?!? Is this guy fucking retarded?”

That tweet, of course, encouraged many people to respond with various comments, but Boatman showed some of his legendary calmness when replying: “Hi @KevinMacPhee You gave me a strong tell you were weak, though i may have called anyway. Retarded? If you say so. But no hard feelings eh?”

But, thankfully, MacPhee had a change of heart after sleeping on it, finally writing an apology to his seen-it-all-before opponent.

He wrote: “Sorry for my outburst earlier… was steaming super hard Apologies to @BarnyBoatman too… sorry mate!”

Of course, the ever-affable Boatman was gracious in accepting the apology, and wrote: “No worries @KevinMacPhee You are a great player and ran super bad at the end. I know how that feels (the run bad part.) Let’s have a beer.” Now that’s a class act, wouldn’t you agree?

Curiously, and I would suggest to prove his point, Boatman has posted a thorough analysis of that hand on the Hendon Mob forum, supplying his reasoning behind his making the call. Check it out.

We could certainly all learn something about composure and class from Barny. Stay cool, folks.