Barny Boatman´s Day 1A chip stack was larger than anybody could amass on Day 1B, and he leads the SKY/DTD UK Poker Championship Main Event going into Day 2. 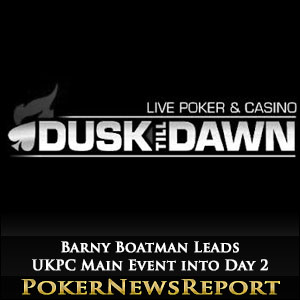 Barny Boatman´s Day 1A chip stack was larger than anybody could amass on Day 1B, and he leads the SKY/DTD UK Poker Championship Main Event going into Day 2.

The £500,000 guaranteed Sky UK Poker Championship Main Event got underway at the Dusk till Dawn Poker Club on Wednesday with a fantastic turnout for the opening flight (of two). 187 players ponied up the £1,100 buy-in or qualified through the numerous satellites into the tournament and, after 9 levels of play, 76 survived to carry chip stacks through to today´s Day 2.

The opening day of the UK Poker Championship Main Event attracted some high profile players, and among those who took a shot at becoming the 2014 UK Poker Champion (but sadly failed) were Eli Heath – who finished fourth in the recent EPT Deauville Main Event), Full Tilt Poker ambassador Sinem Melin and online supremo Toby 810of clubs Lewis.

Included among those who successfully completed Day 1A were last week´s DTD Gran Prix winner Paul Jackson (122,400 chips), Nº1 Dutch all time money winner Marcel The Flying Dutchman Luske (66,100 and Ivey Poker´s Matt Frankland (62,500 chips); however no other player got close to former Hendon mobster Barny Boatman, who bagged and tagged 321,300 chips at the close of play.

More Stars Shine on Day 1B

Yesterday´s Day 1B was far busier – but less brutal – with fewer than half the 435 players who turned up to play being eliminated from the Main Event, and 229 players carrying forward chips and dreams of winning the event. With apologies to the players who contested Day 1A, the second opening flight contained some of the greatest names in British Poker.

Sam Trickett, Sam Razavi, Sam Grafton, Julian Thew, Matt Perrins, Jeff Kimber, James Mitchell, James Atkin and Zimnan Ziyard were among the players who failed to complete the day – Sam Trickett being particularly unlucky to move all-in with Ace-King on a King-high board and find that Kenny Prazer (King-Seven) had flopped two pairs. I didn´t believe him said Prazer as the UK´s most successful player left the table.

Looking Ahead to Day 2 of the Sky UK Poker Championship

A total of 305 players made in through to today´s Day 2 and, when they return to the Nottingham club this afternoon, the game will be entering Level 10 (blinds 500/1,000 – ante 100). The prize money and payout structure for the event will also be announced today – with the anticipated first prize to be somewhere in the region of £125,000 – and, when the players take their seats, the man to catch is going to be Barny Boatman.