U.S. Rep Barney Frank, online gambling’s biggest political ally, has not swayed in his support of internet poker despite last week’s fraud and money laundering charges filed agaimst Full Tilt Poker and its board of directors. 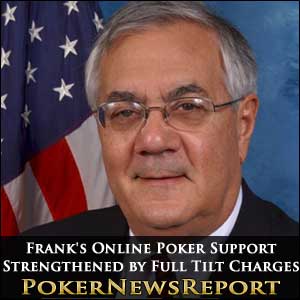 U.S. Rep Barney Frank, online gambling’s biggest political ally, has not swayed in his support of internet poker despite last week’s fraud and money laundering charges filed against Full Tilt Poker and its board of directors.

“I was very disappointed to hear of the allegations,” Frank said, in response to the accusations that poker pros Chris Ferguson, Howard Lederer and Rafael Furst defrauded Full Tilt poker players out of millions of dollars. “But it doesn’t change my views,” Frank added. “If anything, it strengthens them.”

Frank, D-Newton, has been using his office to push for the legalization of internet gambling since 2007. Opponents of that proposed legislation were quick to voice their opinions following the filing of the amended civil complaint last Tuesday in New York. Some of the critics accused Frank of fraternizing with criminals and accepting campaign contributions from members of an illegal industry.

“Frank should refund every nickel of the tens of thousands in campaign donations linked to online gambling,” said Massachusetts GOP spokesman Tim Buckley.

Frank has pledged to return the $18,600 he received from Lederer, Ferguson and Furst. He will either compensate the victims, which means Full Tilt players with unpaid account balances, if a fund should be established for that purpose. If no such fund were to exist, Frank has promised to donate the money to charity.

Many people affiliated with the poker industry believe that the indictment of Full Tilt Poker and its board members is a strong case for the legalization and regulation of online gambling. With all of the [geolink href=”https://www.pokernewsreport.com/online-poker-rooms”]poker sites[/geolink] headquartered in offshore locations, there has never been anyone to police the sites and to make sure that money being deposited by poker players will actually be safe and available for withdrawal upon the players’ request.

There are also those in the poker industry, Frank included, who feel that the government is wasting time and valuable resources by going after online poker sites instead of real criminals.

“The U.S attorneys haven’t done enough about mortgage fraud,” Frank stated. “They should be spending less time on full houses and more time on empty houses.“