Barney Frank, online poker’s staunchest political supporter, has promised to return campaign contributions he received from board members of Full Tilt Poker in light of prosecutors charging the beleaguered poker site with defrauding players by running a Ponzi scheme. 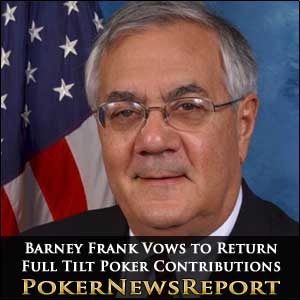 Barney Frank, online poker’s staunchest political supporter, has promised to return campaign contributions he received from board members of Full Tilt Poker in light of prosecutors charging the beleaguered poker site with defrauding players by running a Ponzi scheme.

The Massachusetts Representative received $18,600 from Full Tilt board members over the last four years and $14,000 from Poker Players Alliance, who received a large portion of their money from Full Tilt. Frank seemed a bit taken aback by the allegations made by New York federal prosecutors accusing poker pros and Full Tilt board members Christopher “Jesus” Ferguson, Howard Lederer and Rafael Furst with defrauding players and pocketing $444 million of gamblers’ money.

Frank, D-Newton, has for years been filing legislation proposing the legalization of online gambling and has accepted thousands of dollars in campaign contributions from poker players, lobbyists and various [geolink href=”https://www.pokernewsreport.com/online-poker-rooms”]poker sites[/geolink]. Frank added that since he began his support of online gambling, he has “found myself with a whole lot of new friends in the poker industry.”

Frank is hoping that the Department of Justice will establish a fund in an effort to compensate the victims of the alleged fraud committed by Full Tilt. In that event, he will give his campaign contributions to the fund. Frank said that if no fund is set up, he is prepared to donate the money to worthwhile charities.

Manhattan US Attorney Preet Bharara, the prosecutor who filed the complaint earlier this week charging Ferguson, Lederer, Furst and Full Tilt, believes the poker site was cheating and abusing its own loyal players.

“Full Tilt insiders lined their own pockets with funds picked from the pockets of their most loyal customers while blithely lying to both players and the public alike about the safety and security of the money deposited with the company” Bharara said.

The charges levied against Full Tilt have not caused Frank to change his views on supporting online poker, but he said he will amend his most recent bill making it a requirement that poker sites keep players’ money in a separate trust fund. Full Tilt has long claimed that the money deposited by players was segregated from money used for operating expenses. But the recent allegations claim this not to be the case.

The term “Ponzi scheme” is attributed to Charles Ponzi, who in 1920 ran a fraudelent operation that paid returns to investors or depositors with money received from subsequent investors instead of paying them from any genuine profit earned by the operation. A lawyer for Chris Ferguson strongly dismissed government allegations that Full Tilt Poker is a Ponzi scheme.