One of online poker’s staunchest supporters, Barney Frank, has announced that he will not seek re-election in 2012 and will retire at the end of this current term in office. 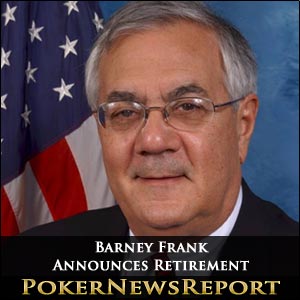 One of online poker’s staunchest supporters, Rep. Barney Frank (D-MA), has announced that he will not seek re-election in 2012 and will retire at the end of this current term in office.

Frank has proposed numerous bills aimed at the regulation of online poker and internet gaming. His latest proposal, HR1174, known as the Internet Gambling Regulation, Consumer Protection, and Enforcement Act, has accumulated 29 co-sponsors from both parties since its introduction in March.

Less than two weeks ago, Frank testified as a witness at a hearing before the House Subcommittee on Commerce, Manufacturing, and Trade that debated regulating online poker and gambling. The Bay State lawmaker voiced his opinions on a colleague’s fears that online poker and gambling are hazardous to problem gamblers and society at large by saying that proper legislation would address the issue and allow the majority of poker players and gamblers who don’t have a gambling addiction problem to enjoy spending their money on internet gaming as they so choose.

The 71-year-old legislator was elected to the House of Representatives in 1980 and was one of the first politicians to publicly admit to being homosexual. As such, he has always been a strong supporter of individual rights and freedoms, especially when it comes to the rights of U.S. citizens to be able to play poker and gamble online.

“This is allowing adult Americans to spend their own money as they wish on a form of recreation that they enjoy,” Frank said of HR1174. “I cannot understand why it’s the role of the Federal Government to prohibit them from doing so… It violates a principle of hands-off the internet. We’re putting special restrictions of what’s done on the internet… The great mass of human activity is not the government’s business.”

When asked if the government should be responsible for regulating internet poker or all of the forms of online gaming, Frank was quick to respond, “I don’t think we should ban poker or anything else that’s voluntary and doesn’t hurt anyone else… Adults should be allowed to do on the internet what they prefer to do. There’s a narrow issue on poker and I’m for as much freedom for people as long as they’re not harming others.”

Despite Frank’s retirement beginning in 2013, the industry of online poker can still count on several Washington lawmakers to carry the ball. Rep. John Campbell (R-CA), the co-sponsor of HR1174, is expected to continue the push for the legalization of internet poker and gambling.

“Millions and millions of Americans enjoy gambling, they want to do it, and they’re doing it,” Campbell said. “In 2006, we passed the UIGEA and we tried to ban internet gambling. Since that bill was passed, the availability of internet poker has exploded. The actual amount of internet gambling has exploded… By banning it, we have expanded what’s going on.”

Rep. Joe Barton (R-TX) is another online poker proponent that the industry will continue to lean on in Frank’s absence. Barton’s proposed bill, HR 2366, entitled the Internet Gambling Prohibition, Poker Consumer Protection, and Strengthening UIGEA Act, would legalize [geolink href=”https://www.pokernewsreport.com/us-poker-sites”]US poker[/geolink] via a series of state-licensed agencies. Barton’s bill has received heavy exposure in the House subcommittee hearings and could very well be on its way to be marked up soon.

One of the major reasons for Frank’s retirement is apparently due to the boundaries of his 4th Congressional District being changed following Massachusetts’ recent process of redistricting. Frank’s district has been redrawn in such a way that the stronghold he enjoyed in the predominantly Democratic area of New Bedford no longer exists. Frank was victorious in the 2010 election over 35-year-old Republican challenger Sean Bielat by a slim margin of 11 percentage points.

“I think the realities of this district are a lot less favorable now and he had a tough time last time,” Bielat recently told the Boston Herald.

Frank conceded this to be true, concerned not so much about facing a new challenger as he was about introducing himself to a new constituency.

“I don’t want to be torn between a full-fledged campaign in a district with 325,000 new people and my obligation to the existing district and that is reinforced by the fact that I would have a hard time going to 325,000 new people, some of them in areas that I am not very familiar with like the Blackstone Valley, and say, ‘by the way I would like to be your Congressman for two years,‘” Frank admitted.

In serving the people of Massachusetts for 16 terms and more than 30 years, Frank is known by his Democratic colleagues for his outspokenness and leadership qualities.

“No one’s ever doubted for a minute what Barney Frank thinks or where he stands, and if you weren’t sure, trust me, he’d tell you,” said Sen. John Kerry (D-MA). “That’s the special quality that has made Barney not just beloved and quotable, but unbelievably effective as an advocate and a legislator.”

Frank said that upon retirement, he will focus on teaching, writing and lecturing, but is not interested in becoming a lobbyist, a role that many retired lawmakers ultimately choose. He also sees upsides to retiring, one in particular.

“I don’t have to pretend to be nice to people I don’t like,” Frank said. He added that he would like to continue to advocate public policy initiatives that are important to him, such as issues of gay rights and the Defense of Marriage Act.

Frank is currently the Ranking Member of the House Financial Services Committee. He previously chaired the committee until a Republican majority took over control of the House of Representatives last year.