Freeroll qualifier Arturs Barkevics pulled off a sensational victory in the William Hill Poker Open in Punta Cana, after starting the final table in last place. 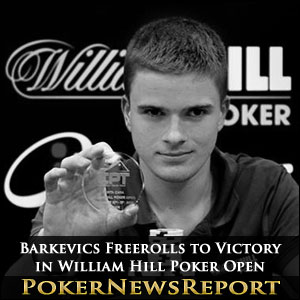 Freeroll qualifier Arturs Barkevics pulled off a sensational victory in the William Hill Poker Open in Punta Cana, after starting the final table in last place.

The William Hill Poker Open was the feature tournament in the first leg of the thirty-two event Caribbean Poker Tour which is taking place in the Dominican Republic and Sint Maarten, and headlines with the $3,500 buy-in WPT Caribbean Main Event which starts on November 19th.

The tournament attracted 111 entries for the $1,500 buy-in event and, after two days of action, nine players returned to the Princess Tower Casino in Punta Cana to contest the final table. Denmark´s Martin Strausholm and Sweden´s Nicklas Alf had a commanding advantage at the top of the chip counts, while two East Europeans – Valentyn Shabelnyk and Arturs Barkevics – were in serious trouble with blinds of 5,000/10,000 (ante 1,000).

All three short stacks doubled up against the two chip leaders within the first 30 minutes of play, and it was Canadian Jeff Cote who was the first player to bust – and in very unfortunate circumstances. Cote got the last of his chips in with A♣ 4♦, and received a call from Martin Strausholm (J♣ K♦). Cote was looking good to be the fourth player to double up after the flop of 5♣ A♠ 2♣, but the Q♦ and 10♠ completed the board to give Strausholm a backdoor Broadway straight and eliminate Cote from the tournament in ninth.

Having moved into a big chip lead, Strausholm looked like extending it further when Arturs Barkevics moved all-in with A♥ 8♥ from the button and Strausholm woke up in the Big Blind with Q♠ Q♣. Unfortunately for Strausholm, Barkevics paired his Ace on the flop of 3♥ A♣ 2♦ and, just for good measure spiked the 8♦ on the river to take his chip stack beyond the 200,000 chip mark.

Shabelnyk Goes and Wenlin´s Roller Coaster Falls Off the Rails

Wang Wenlin had started the final table of the William Hill Poker Open in fine form – doubling up against Nicklas Alf Q♦ Q♥ > Q♠ J♠ and then scoring a knock-out blow against Valentyn Shabelnyk when his K♦ Q♠ held against the Q♦ J♥ of the Ukrainian. However, the Chinaman´s luck deserted him in the hand following Shabelnyk´s elimination, when he called a shove from Neil Slade (K♣ Q♣) with A♥ 6♥, and Slade caught the Q♠ on the River to double up.

Soon after, Wenlin (J♥ J♣) got into a pre-flop raising war with Nicklas Alf (Q♥ Q♣) which resulted in Wenlin jamming the rest of his stack and getting a call from the Swede. With no saviour Jack on the board, Wenlin´s roller coaster ride finished in seventh place, while Nicklas Alf returned to close to his starting stack with 517,000 chips.

Three More Bust before Dinner as Barkevics Moves into Lead

The two levels prior to the dinner break were brutal, and saw the final table of the William Hill Poker Open reduced to just three players. Neil Slade (A♠ K♣) failed to find the necessary improvement to get past Arturs Barkevics´ A♦ A♣ and was eliminated in sixth, before Igor Kirillov three-bet shoved with A♦ K♠ and failed to connect with the board against Nicklas Alf´s 8♠ 8♦ to bust in fifth.

Sensing his lucky escape, Barkevics applied the pressure and used his chip advantage to reduce Alf to less than 600,000 chips. The deciding hand of the tournament came an hour into heads-up play, when Alf check-called a bet of 95,000 chips after the flop of 7♥ 5♣ Q♠ and then moved all-in on the Turn of 8♥. Barkevics made the call and the cards were on their backs:

Barkevics 6♣ 9♣ for a Turned Straight

The meaningless 9♥ was dealt on the River, and Arturs Barkevics was the William Hill Poker Open Champion, after qualifying for the event in an online freeroll satellite and recovering from having just six Big Blinds at the start of the day to win the $41,000 first prize.