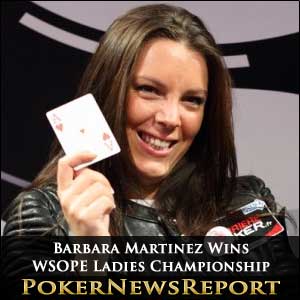 Only the UK´s Eleanor Gudger and Germany´s Susanne Kaufer were the only non-domestic players to reach the final table, despite a strong international field which included Canadian Isabelle Mercier, American Kimberley Bastien and the last woman standing at this year´s WSOP Main Event, Erika Moutinho.

Despite the conflicting start with the WSOPE Main Event, 112 women paid the €550.00 buy-in for the Ladies Championship – the only feature event of the 2011 WSOPE series which gave away a Champion´s ring instead of a bracelet. A total prize pool of €53,760 was generated, of which Martinez captured the lion(ess)´s share of €16,128, with the eleven ladies below her also making their participation in the two-day event worthwhile.

Victory in the WSOPE Ladies event was neither Barbara Martinez´s first major live poker triumph nor her biggest. This time last year, Barbara was picking up the winner´s cheque in the Marrakech Poker Open, but prior to that she had final tabled for €36,000 at the Belgian Open (the event which brought her a sponsorship from Barriere Poker) and has also cashed the WSOP Main Event, the WPT Barcelona Main Event and ran second in Barriere Poker´s own poker tour in May.

Although a tremendous result for French poker, it would be interesting to hear what James Bord had to say about just one American cashing. Joking aside, it was a fantastic achievement for the UK´s Eleanor Gudger to finish second to the professional player and collect €9,968 ahead of some top lady poker players including Isabel Baltazar – who final tabled in the EPT Barcelona Main Event earlier this year – and wide eyed Feliciana Cannillo, who almost got the better of the men in the Chilipoker Deepstack Open held in the same casino on Cannes. Hopefully Eleanor will go onto even better results from here.