Martin Bader produced a stunning heads up come back to overturn a 6-to-1 chip deficit and win the first Grosvenor UK Poker Tour Main Event of 2013. 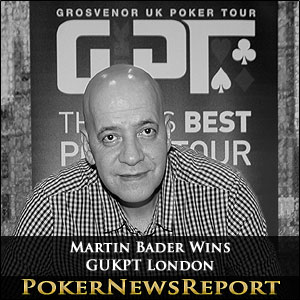 Martin Bader produced a stunning heads up come back to overturn a 6-to-1 chip deficit and win the first Grosvenor UK Poker Tour Main Event of 2013.

An incredible 397 players paid the £1,070 buy-in or qualified online to compete in the first GUKPT Main Event of 2013 at the Victoria Casino in London – almost doubling the guaranteed £200,000 in prize money and proving so popular that, when the final day started, twenty-one players were still in contention for the £103,240 first prize.

At the head of the leaderboard was Chiraag Thanki with a stack of 762,500 chips, but he was closely followed by David Barraclough with 617,000 chips and Tamer Kamel with 570,000 chips in a mostly well-stacked and tightly packed field which included GUKPT regulars Marc Wright, Steve Watts, Kevin Williams, Jeff Duval and Global Poker Index #1 Marvin Rettenmaier.

Marvin Rettenmaier was involved in the first elimination of the day – rivering a Queen to pair his hand and bust Alex Lindop in twenty-first place – before he was busted out in sixteenth after coming second in a AJ < 77 race against Martin Bader. Meanwhile Marc Wright was the first player to break the 1 million chip barrier and took a big chip advantage in the tournament when busting out Tamer Kamel in fifteenth (AQ > A7).

The final table of nine was set after four and a half hours of play, when Martin Bader eliminated Ashley Thompson in tenth (AK > A7), at which point the chip counts looked like this:-

Unfortunately for the last lady standing – Sin Melim – her stay at the final table was to be the shortest. Getting all her chips into the middle after the river with a paired Ace, she was called by Marc Wright who had turned a straight. Wright´s massive chip stack did not last long as his Aces were cracked by Jamie Roberts (KK hit a set on the flop) in the hand that Antonio Millan was eliminated chasing a straight against the two chip leaders.

However, the chip stacks started to even out as David Barraclough doubled up (KQ < J10) against Marc Wright and Paul Alterman flopped a set of Sixes to take a stack from Jamie Roberts. Paul Alterman temporarily took the chip lead when hitting two pairs against a faltering Marc Wright and, soon after Martin Bader had bust Chiraag Thanki (KQ – Queen pairing on the flop to beat Thanki´s A9), Jamie Roberts was to become the shortest-stacked player when his Kings were cracked on the turn by Jeff Duval´s pocket Nines.

Roberts Busts Before Deal is Done

Indeed Jamie Roberts was the next player to be sent to the rail – moving all in with KQ and being called by Marc Wright (AQ). Both players paired their Queens on the flop, but Wright took the hand courtesy of the Ace kicker. The five remaining players then negotiated the first of several deals that would take place before the end of the event – each locking up £45,000 and leaving £38,630 to play for.

Thereafter the action speeded up. Marc Wright was unfortunate to be busted in fifth in another AQ v KQ race, when Martin Bader hit a straight on the river. Bader also eliminated Jeff Duval in fourth when both players missed the open-ended straight draws they were chasing, but Bader paired his Ace on the river to take the hand. However, David Barraclough had seen the biggest growth in chips during short-handed play and, when he sent Paul Alterman to the rail in third, he took a 6.8 million -v- 1.1 million chip advantage into the heads-up.

Sensational Come Back from Bader

Martin Bader made all the right calls during the heads-up (before which yet another deal had been agreed). In the third hand of the conclusion to the GUKPT London Main Event his pocket Sixes held against Barraclough´s A7 and then he flopped a Full House to take the chip lead. Three hands later and it was all over when David Barraclough shoved with K5 and was called by Martin Bader holding A9. The table blanked for both players and Martin Bader was the GUKPT London Champion.

Because of all the deals that had been made during the climax of the Main Event, David Barraclough took home the biggest slice of the prize pool, with the rest of the payouts looking like this:-