Amir Babakhani – winner of the WPT Canadian Spring Championship less than three weeks ago – leads the remaining 24 players in the WPT World Championship. 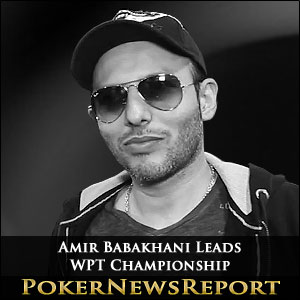 Amir Babakhani – winner of the WPT Canadian Spring Championship less than three weeks ago – leads the remaining 24 players in the WPT World Championship.

Amir Babakhani had what he described as an ‘unreal’ day after spending much of it in position over Phil Hellmuth and relieving the 13-time WSOP Bracelet winner (who has yet to win a WPT Main Event) of a substantial number of chips. The Toronto native was also responsible for the elimination of Paul Klann (K♠ 8♥ > 4♦ 4♠) to start the day in the best possible fashion, and Amir Babakhani finished the day by busting out Larry Ormson (10♥ 9♦ > 8♠ 7♠) to bag up 1,220,000 chips.

Big Names in the Chasing Pack

Behind Babakhani and Steven, twenty-two players will be chasing the money when play resumes at the Bellagio on Tuesday. Among them are the aforementioned Jake Cody who managed a second late double-up (A♠ J♠ > K♠ Q♥) against Jonathan Roy, Jason Mercier who also made a late leap for glory when doubling up against Will Failla (10♥ 10♠ > 8♥ 8♣) and Daniel Negreanu who, by his own admission, got “Super Lucky”, tweeting

Daniel Negreanu survived the rest of the day to finish with 329,000 chips, but his good fortune was not shared by Phil Hellmuth, reigning WPT Champion Marvin Rettenmaier or Will Failla, who after losing a portion of his stack to Jake Cody (above) got the last of his chips in with 10♥ 10♦ for a flopped set of tens only to be called by Matt Hyman (K♣ J♣) who had flopped a King-high flush.

Looking Ahead to Day 4 of the WPT World Championships

With only 15 of the remaining 24 players going to cash in the event, expect some very nitty play on Day 4 of the WPT World Championships. Chip leader Amir Babakhani said in an interview after the seat draw had been announced that his game-plan for today would be to tighten up – a wise move considering he is drawn on the same table as third placed Matt Hyman, Jason Mercier and Daniel Negreanu.

When play resumes at the Bellagio, players will be entering Level 16 (blinds 5,000/10,000 – ante 1,000). Play is expected to continue for a further five 90-minute levels, during which time the bubble should be burst and the tournament will be in the money. Those with the best chance of pocketing at least a min-cash of $49,210 include:-