Lebanese poker player Ayman Zbib will be the overall chip leader when the two opening flights of the EPT Deauville Main Event combine today for Day 2. 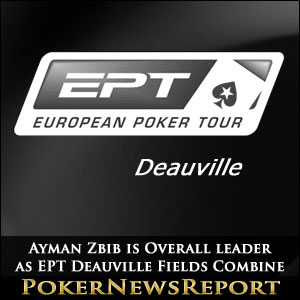 Lebanese poker player Ayman Zbib will be the overall chip leader when the two opening flights of the EPT Deauville Main Event combine today for Day 2.

The PokerStars.fr sponsored EPT Deauville got underway on Sunday, with a second opening flight played at the Barriere Casino yesterday; and, when survivors from both Day 1s combine this afternoon, Ayman Zbib will be the overall chip leader with a stack of 181,400 chips.

Zbib got the majority of his chips prior to the dinner break en route to busting Dave “Dubai” Shallow who – according to Sunny Chattha – made a Full House with pocket Aces after Shallow had flopped two pairs with Ace-Queen, and then Zbib eliminated Shallow when he rivered a set of Fives to best Shallow´s King-Ten combination on a King-high board.

In Zbib´s wake is Alain Bauer – who amassed his stack of 160,100 chips late into Day 1B to lay in second place overall – and the third and fourth positions on the leaderboard are filled by Chris Day (154,100 chips) and Jorma Nuutinen (154,000 chips) who were separated by one-sixth of a Big Blind when play finished on Day 1A.

Stars Not yet in Top Gear

The opening flights of the EPT Deauville Main Event saw another disappointing performance from the PokerStars sponsored professions who failed to ignite once again after a lacklustre showing at the EPT PokerStars Caribbean Adventure.

On Sunday only Eugene Katchalov (74,000 chips) and Marcin Horecki (71,300 chips) survived to carry through chips to Day 2, while Alex Kravencho (34,600) was the best of the bunch yesterday when Jake Cody, Victoria Coren and Luca Pagano were all sent to the rail.

Jan Heitmann (27,700 chips) and Julien Brecard (27,200 chips) also managed to survive Day 1B – but with fewer chips than they started with – while Bertrand “ElkY” Grospellier (9,900 chips) is going to need a miracle if his participation in the EPT Deauville Main Event is to go any further.

Looking Ahead to EPT Deauville Day 2

When the 392 surviving players take their seats at the Barriere Casino in Deauville for Day 2, they will be entering Level 9 of the EPT Main Event with blinds of 400/800 and a 100 chip ante. Eight more levels of play are scheduled for today, with the first six levels lasting 75 minutes and the final two being 90 minutes in length.

To date, 667 players have ponied-up the €5,300 buy-in or qualified online to compete in the event (as compared with 782 entries for the EPT Deauville Main Event last year), and late registration is open until the start of play today – when the prize pool and depth of the payout structure will be announced.

You can get a summary of each day´s action at the EPT Deauville Main Event by following @PokerNewsReport on Twitter.