Avik Mittal took down the Deepstack NL Hold´em Event #7 at the Borgata Poker Open for $45,987 just weeks before he is due to return to India to get married. 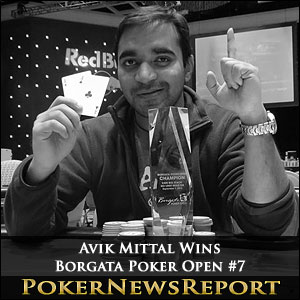 Avik Mittal took down the Deepstack NL Hold´em Event #7 at the Borgata Poker Open for $45,987 just weeks before he is due to return to India to get married.

A nice story surrounded the winner of the $400.00 buy-in $100,000 guaranteed Deepstack NL Hold´em – Avik Mittal – who is flying back to India in October to get married. The celebrations are likely to be that much livelier, now that Mittal has an additional $45,987 to his name after winning Event #7 of the Borgata Poker Open.

Mittal currently lives in New York – and is a frequent visitor to the Borgata Casino, where he plays in the $1.00/$2.00 cash games – but, up until yesterday, his total live poker tournament cashes to date amounted to $1,400. He almost did not even play in the tournament after finishing work late and arriving at the casino just thirty minutes before the close of late registration.

However, once he had joined the game – and just survived the bubble – Mittal was able to chip up nicely while other players around him took risks with their small stacks. Mittal entered the final table of the tournament in second place with 1.4 million chips courtesy of an A♦ Q♠ > A♠ 8♣ hand towards the end of Day 1, when both he and his opponent caught two pairs on the board.

There was a fast and furious start to the final table, with three eliminations within the first hour. With blinds of 20,000/40,000 (ante 4,000) several players needed to act quickly, and Trish Heller believed she had found the right spot to get the last of her chips in with A♦ 10♦ on a board showing two diamonds. Heller was called by Wendy Freeman, whose pocket Tens held as the Turn and River both blanked for Heller.

Dadong Yan (Q♠ J♠) then attempted a squeeze on Adam Taplinger (K♦ Q♦), who called Yan´s shove and took a massive lead in the hand following the flop of K♣ 6♥ 4♠. Yan also received no help from the Turn or River, and he was bust in ninth. A few hands later, and Paul Shedaker was joining Yan at the Cashier´s desk after getting all his chips in with pocket Sevens on a board of 8♦ 8♣ 6♣. Shedaker was called by Marino Scarurro (5♣ 3♣), who was chasing a baby flush, and this time the player in the lead after the flop did not hold on to win the hand as the Q♣ spiked on the River to give Scacurro his flush and to bust Shedaker in eighth.

As the blinds increased to 25,000/50,000 (ante 5,000), Marino Scarurro improved his chip advantage when his pocket Jacks bust out Max Digilov (Q♠ 9♥), but his stay at the top of the leaderboard was to be brief. Danny Aharoni crashed out of Event #7 of the Borgata Poker Open after losing half his chips in an abandoned bluff against Avik Mittal and then moving all-in from the button with A♦ 3♥ against Wayne Mernone´s A♥ K♥ – losing his last 600,000 chips when his hand failed to improve and leaving the table in sixth.

The heads-up between Avik Mittal and Wendy Freeman was set after Mittal had eliminated both Adam Taplinger and Wayne Mernone in fourth and third place respectively. Taplinger was particularly unlucky to bust out in fourth, after seeing his K♠ 3♠ look likely to earn a split pot against Avik Mittal´s K♣ 4♣ on a board of A♣ 9♥ J♦ / J♥; but the 4♦ on the river gave Mittal two pairs, and signalled the end of Taplinger´s participation in the Borgata Poker Open Event #7.

The elimination of Wayne Mernone was far more straightforward. With blinds now at 50,000/100,000 (ante 10,000), Mernone (A♣ 9♠) moved over the top of Mittal´s (J♥ J♦) pre-flop min-raise and Mittal made the call. Wayne Mernone´s hand failed to improve passed Mittal´s pocket Jacks, and he was eliminated in third – giving Avik Mittal a 3:1 chip advantage going into the heads-up.

The heads-up started as a cagey affair, with both players posturing to get a read on the other. The pivotal hand came after about 30 minutes, when Mittal had called Wendy Freeman´s check-raise on a flop of Q♦ 5♥ 3♦. Mittal then led out for 600,000 chips on the 3♥ Turn, which caused Freeman to fold her cards and be left with just 1.3 million chips.

Wendy Freeman then moved all-in pre-flop with 10♣ 4♠ and Mittal had an easy call to make with A♦ A♣. A Ten on the flop gave Wendy Freeman hope of an unlikely double-up, but the rest of the board blanked, allowing Avik Mittal to capture the Borgata Poker Open Event #7 and to start revising his plans for next month´s wedding.