Austrian poker player ‘crackin_ty’ has lifted the biggest ever prize from the PokerStars Red Spade Open by picking up $247,378 for taking down the latest $55 buy-in event. 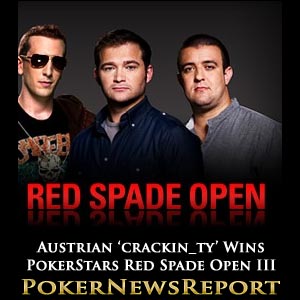 Austrian poker player ‘crackin_ty’ has lifted the biggest ever prize from the PokerStars Red Spade Open by picking up $247,378 for taking down the latest staging of the $55 buy-in event.

Additionally, ‘crackin_ty’ earned 4,248.26 PokerStars Tournament Leader Board (TLB) points to take him to the top of the weekly TLB standings.

An impressive 55 members from Team PokerStars Pro and Team PokerStars Online started the tournament, with the likes of Bertrand ‘ElkY’ Grospellier, Eugene Katchalov and Jason Mercier included – and eliminated with $100 bounties on their heads.

But it was Spanish Team PokerStars Pro ‘ana marquez’ who made the best impression when taking 36th place for $1,991.

Fans of The Big $55 tournament – which was suspended for one week to allow the Red Spade Open to take place – will be happy to hear that this event returns to take up its weekly usual spot on Sunday, March 4.

Meanwhile, the fourth Red Spade Open hasn’t yet been given an exact date, but PokerStars expect to run this wonderful event again in mid-summer.

Now, if you are not aware of this $55 tournament, then maybe you should check it out before the next time as PokerStars always guarantees a minimum prize pool of $1 million, while the top prize never drops below $200,000 – before any deals are made, of course.

Players with the world’s biggest poker room don’t even have to pay the $55 buy-in, if they have enough FPPs (frequent player points) as just 3,100 will do to gain entry to the starting flight – depending on your current status with the VIP Club

Here’s how to navigate to the next Red Spade Open, when it is announced. Go to the PokerStars lobby, look for ‘Tourney’, and then locate ‘Special’ to check any updates. Alternatively, you can make use of the search facility to find ‘Red’ and, hey presto, you’ll see the Red Spade Open.

You never know, you might well find yourself at a table with players such as Grospellier, Katchalov, Mercier and Marquez next time, with the added bonus of knowing that knocking out any one of those four would guarantee you $100.

Just imagine the bragging rights you would have by eliminating one of the world’s best players.

Now, if you’re not sure which players are PokerStars Pros – as most will be using curious nicknames – there will be a red spade alongside their name within the player list. Easy.