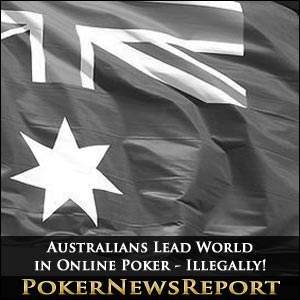 New research prepared by the German research group Academicon for an Australian government review of online poker has revealed that Australians lead the world in online poker – albeit illegally!

Online poker has been illegal in Australia since the Interactive Gambling Act 2001, yet the research indicates that almost 130,000 Aussies – out of a total population of 22 million – are logging into their online poker accounts on a regular basis.

Using statistics to compare nationality to nationality, where they are available, can be a bit misleading because many countries are not completely ring-fenced – for example French online poker sites allow players from outside of France to compete on their sites – and players in one country can compete on another country´s online poker site if they have a Virtual Private Network or proxy server facility. However even allowing for variance, the proportion of Australians competing in online poker games is way higher than anywhere else in the world.

Dr Charles Livingstone – one of the lead researchers providing data for the Government review -admitted he was not surprised by Academicon´s findings and suggested that the figures (compiled throughout 2010) were likely to be on the low side. He said the data held by the University of Hamburg’s database is undoubtedly useful, but probably not as a source of overall prevalence or expenditure figures. In 2008, a similar report revealed that there were 363,100 active online poker accounts in Australia.

Good news for all those breaking the law in Australia is that the Federal Government are considering relaxing the online gaming laws to “allow” access to online poker. The bad news is that their motives are to get their hands on some of the A$249,000 million spent each year on online poker – a move which decimated the online poker industry in Spain and has crippled a number of smaller [geolink href=”https://www.pokernewsreport.com/online-poker-rooms”]online poker web sites[/geolink] with high licence fees and empty tables.

At least you have the Ashes to look forward to!