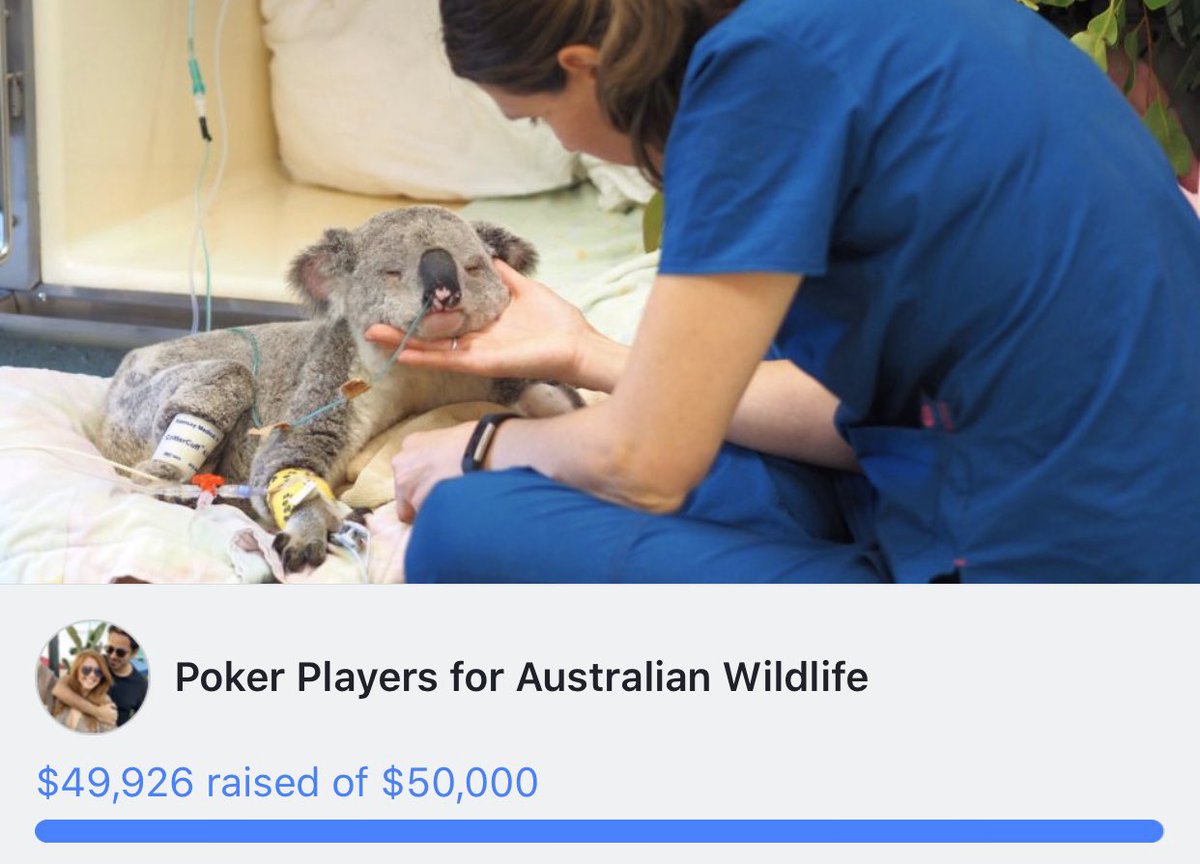 Australia has been suffering one of the worst cases of bushfire ever for the last couple of months. Fires “in the bush” in the Land Down Under are quite common, but the scale of this one really made the entire planet worry about the future of the southernmost continent.

Thousands of homes were lost in the fire, and a total of 26 people died in it.

What’s probably even worse is that the fire was a devastating blow to the wildlife of Australia. Flora and fauna of this country are rather unique, with koalas, kangaroos, and thousands of other animal and plant species being located there and nowhere else in the world.

However, the wildlife faced a quite unexpected turn of events, and now approximately a billion and a half animals are believed to have disappeared in the blaze.

The poker community of Australia and the entire world jumped in to help with this ongoing issue.

First of all, Crown Resorts, a popular casino and hotel which hosts Aussie Millions, pledged A$5 million for bushfire relief of Australia. However, not only companies but also individuals decided to take action and help those in need.

Lynn Gilmartin is one of the popular presenters in the poker world, having been a WSOP anchor for quite a while. She hosted a social media fundraiser back in 2017 when Mexico City was affected by earthquakes, so she was pretty familiar with this type of charity events.

On Jan. 6, Gilmartin hosted another fundraiser on Facebook, which aimed to collect money for the wildlife in Australia.

Named “Poker Players for Australian Wildlife,” the event managed to spark attention in the poker community, which immediately jumped in to help alleviate the suffering of animals and people in Australia.

One of the most popular poker players in the world right now is Kahle Burns. It just so happens that Burns is an Australian and was deeply affected by the disaster that his country was going through.

Burns is an exceptional poker player and even better poker coach, and he decided to offer free coaching lessons for groups to all people who donated at least $500 for Australia.

However, Burns was not the only one to ask the poker community for help, as many other players joined too.

Kitty Kuo is a popular poker player with a great portfolio. She has been pretty active lately, and one of the tournaments where she decided to take part in is Aussie Millions. The Main Event of the tournament is set to start on Jan. 17 and to last until Jan. 21.

Kuo decided to pledge a total of five percent of the cash she wins at the Main Event for those affected by the bushfire.

If you’re also concerned about the events in Australia, you, too, can donate on Facebook by joining the fundraiser by Gilmartin. At the moment, more than A$60,000 has been raised, and the total goal is A$100,000.

A total of 558 people donated in just nine days, and it seems that the speed of donations will not slow down soon, as more people from the community decided to join the cause.