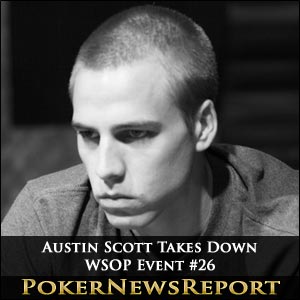 The 23-year-old pro battled back from a huge chip disadvantage late in the $3,000 buy-in Pot-Limit Omaha tournament to beat a fearsome final table line-up that had more than a few outstanding players, including Belarussian Vadzim Kursevich (third for $158,530), Germany’s Huykeim Nguyen (fifth for $83,180), two-time bracelet winner Russ ‘Dutch’ Boyd (eighth for $35,038) and Swede Thomas Pettersson (ninth for $26,966).

However, it all came down to Scott’s clash with New York’s Brett Richey for the title, with the latter collecting $223,492 as the runner-up. Scott obviously enjoys this event as he finished in eighth place last year for $40,748, but he certainly improved on that display wit his first gold bracelet in the series.

The day started with Kursevich as chip leader at the Rio All-Suite Hotel & Casino, with the Belarus pro staying ahead for the majority of the final day, before a massive clash with Scott when play was four-handed.

With Nebraska’s Scott Stanko exiting the final table in fourth place for $114,037, it all came down to Kursevich, Scott and Richey – and it was the European who fell short of the heads-up clash when crashing out in third place for $158,530.

Scott started his heads-up encounter with Richey way ahead on 4,241,000 chips to 1,060,000 and, while the latter fought hard, he just couldn’t overcome that 4 to 1 disadvantage.